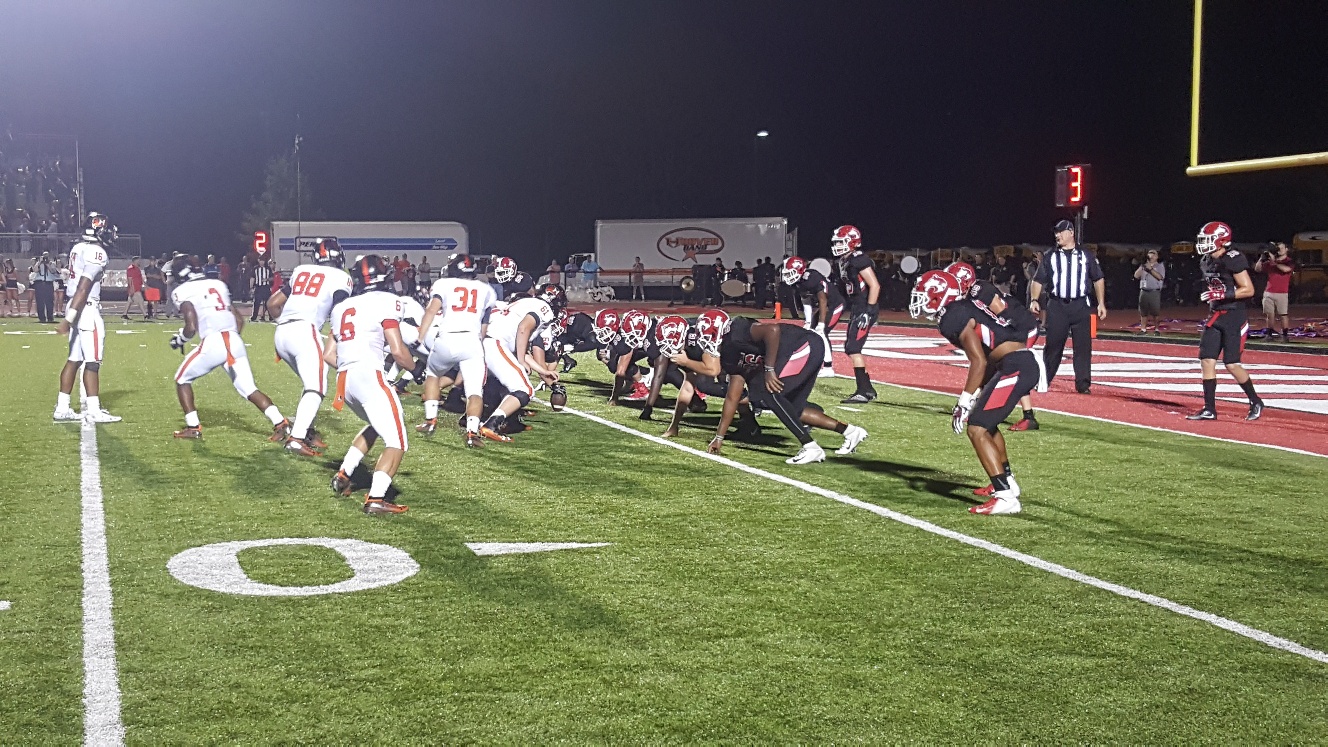 TRUSSVILLE— On Friday night, Hewitt-Trussville did something that no player on their team has even witnessed in their lifetime. For the first time in 21 years, a Hewitt-Trussville football team defeated Hoover. The Huskies caught everyone off guard by using their rushing game to put 56 points and over 600 yards of total offense in a 56-28 win over the number one ranked Buccaneers.

Hewitt-Trussville opened up their first drive with a 46-yard run by Armoni Goodwin and pounded their way deep inside Hoover territory before a penalty negated a third-and-short conversion that would have given the Huskies a first down inside the Bucs 15. The Huskies went for it on fourth down but failed to convert, the only drive in the first half that didn’t end in a Husky touchdown.

Hoover made quick work of their first drive as Bobby Ashford hit George Pickens on a 47-yard touchdown pass to put the Bucs up 7-0 in the first quarter. The Huskies answered right back as quarterback Paul Tyson had a big 19-yard pass to Ja’varrius Johnson to keep the drive alive. Four plays later, Antonio Reed scored from 9 yards out to tie the game at 7.

Hoover’s second drive ended after they failed to convert a third down as Ashford was sacked by Maurice Williams, Williams’ first of two sacks in the first half. The Huskies benefited from a shanked punt by Hoover that gave them possession at the Bucs 44 to start their third drive. Two plays later, Cameron Bledsoe scored on a 10-yard run to put the Huskies up 14-7.

The Bucs mounted a comeback in the third quarter as they got off to a hot start with McCammon scoring a 24-yard rushing touchdown to cap off a 7-play, 77-yard drive. The Bucs then recovered a fumble deep in their territory to prevent the Huskies from adding to their lead. On third-and-goal, the Bucs used a wildcat formation and direct snapped the ball to McCammon who easily walked in for another touchdown. The Huskies lead was down to one touchdown, leading 35-28.

After forcing Hewitt-Trussville to punt on their next series, the Bucs took over on their own 10-yard line. The very first play resulted in an interception as defensive lineman Eric Taylor snatched Robby Lashford’s pass out of the air at the line of scrimmage, giving the defense a pick-six and a 42-28 lead. Speaking with Hewitt-Trussville head coach Josh Floyd on the impact of Taylor’s play, Floyd said “That was probably the play of the game. We knew Hoover would come out in the second half hot and they had all the momentum but that play changed the game.”

Taylor said about the pick-six after the game “I’m surprised I didn’t drop it. When I saw it in my hands, I just took off.”

The next Hoover possession saw Ashford throw his second interception of the night as he was picked off by Creed Parker on the third play of the fourth quarter.

Armoni Goodwin added two more rushing touchdowns in the fourth quarter to seal the deal for the Huskies as they defeat Hoover for the first time in 21 years with a 56-28 score. The Huskies now have a 2-0 region record and the first big test checked off in the toughest region of Alabama high school football in region 3.

After the game, both Paul Tyson and Pierce Quick mimicked the words of their head coach as both talked about how the game plan all week was to run the ball and create their identity on the back of their rushing attack.