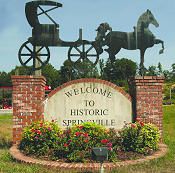 SPRINGVILLE – Mayor Isley and City Council Members worked through a full agenda at the Sept. 17 regularly scheduled City Council Meeting. This being the last meeting for the fiscal year, multiple agenda items were pertaining to budget allocations for FY18 and FY19. Mayor Isley noted that the budget committee anticipates the final version of the FY19 budget to be complete mid-October.

The council discussed how to best allocate funds remaining within the FY18 Contributions budget. Given that unused funds cannot roll over into the FY19 budget, the Council determined to equally distribute the surplus funds to each of the three city schools. Specifically, each school will receive a $700 contribution from before the end of fiscal year 2018, which concludes Sept. 30.

An  overview of Ordinance 2018-13 Sweetwater voter district was provided by City Attorney James Hill. Hill shared the recommendation provided by a voter registration consulting group, which was to add Sweetwater residential neighborhood to District 2. The shift would result in 950 potential voters in District 2, and approximately 650 voters in all other districts. The ordinance will come before the council for vote at the next regular meeting.

After multiple unanswered requests by Mayor Isley for a motion to approve Ordinance 2018-12, the proposed amendment to the Zoning Ordinance regarding Special Exception uses in B-2 General Business District was defeated by a no vote.

A Park Licensing Form was approved subject to revision as needed. Submission of a completed form will become a required step for individual sports seeking licensed use of facilities maintained by the city. The intention of the new process is to free the directors of the various sports from the responsibility of managing funding, while also providing stronger accountability for maintenance costs incurred.

In his report to the council, Mayor Isley noted that $90K are approved and available to begin asphalt paving, as well as various surface treatments. The Mayor reported various companies express a willingness to do a portion of the work, but would not confirm a start date. The council agreed to seek additional bids for the projects in hopes to begin work before lower temperatures would hinder paving progress.

The Mayor also explained to council members that a documented complaint is required in order to take action against individuals accused of harassment or intimidation. All council members were encouraged to explain the need for documentation to any constituents or citizens that may express the need for assistance in such matters.

The next Regularly Scheduled City Council Meeting is scheduled for Oct. 1 at 6:00 p.m. A work session will directly precede the meeting, beginning at 5:30 p.m.