SLOCOMB – The Slocomb Police Department is asking for the public’s assistance in locating a missing senior, Johnny Frank Thompson. 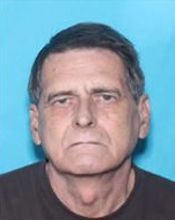 Mr. Thompson is a 63 year old white male and may be suffering from a condition that may impair his judgement.  He was last seen wearing a white t-shirt and blue jeans on Lewis Road in Slocomb, Alabama on September 18.

Mr. Thompson may be driving a silver 2001 Mustang GT bearing Alabama tag #34AV461.  If anyone has any information regarding the whereabouts of Johnny Frank Thompson, please contact the Slocomb Police Department at (334) 684-6947 or call 911.