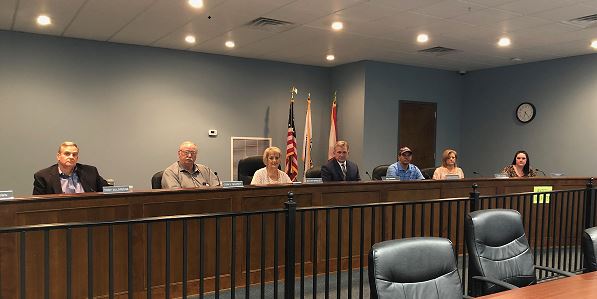 ARGO — The Argo City Council met on Monday.  Mayor Betty Bradley led the room in a call to order, a heart-felt invocation was then given, followed by a pledge of allegiance to the flag.  Afterwards, the council proceeded with city business.

The majority of the council’s time was spent taking in information from a representative of the GUS (Governmental Utility Services Corporation), and Mayor Lee of Moody – who is the Moody GUS board president.  The city of Argo is currently considering signing a new 30-year contract that would allow GUS to continue providing sewer services to the city.

As per the recommendation of a recent rate study, GUS would like its customers to adopt “a consistent invoicing method”.  As it is now some service areas pay a metered rate while others pay a flat fee.  GUS would like every service area to be on a pay-per-quantity basis and explained that such a method is the best way to ensure that low need users do not end up subsidizing the costs of high need users.  They would also like rates to be uniform across the areas they serve.

The new across the board price for service would be if the contract is adopted, $11.26 for a base fee and $9.94 per every thousand gallons used.  This represents an increase for some, however, the GUS contends that the new price is far below their total costs of production.  The Gus would, over a many year period, eventually bring prices up to the point to where income equaled expenditure.

The council approved an ordinance that a letter be drafted requesting clarification from the GUS on the amount of utility tax that could be charged, a schedule for rate hikes and a copy of the company’s policy on pump fees; which are an $11 charge added onto the customer’s bill to pay for hardware.  The GUS has plans to phase out their involvement with that specific piece of hardware which would automatically drop their billing by $11 per month.

The first of the public comments had to do with de-annexing a piece of property bordering and partially located within, Trussville.  The council was not in favor of de-annexation.

The mayor will coordinate with the Argo Chief of Police and the council will consider other measures to solve the situation.