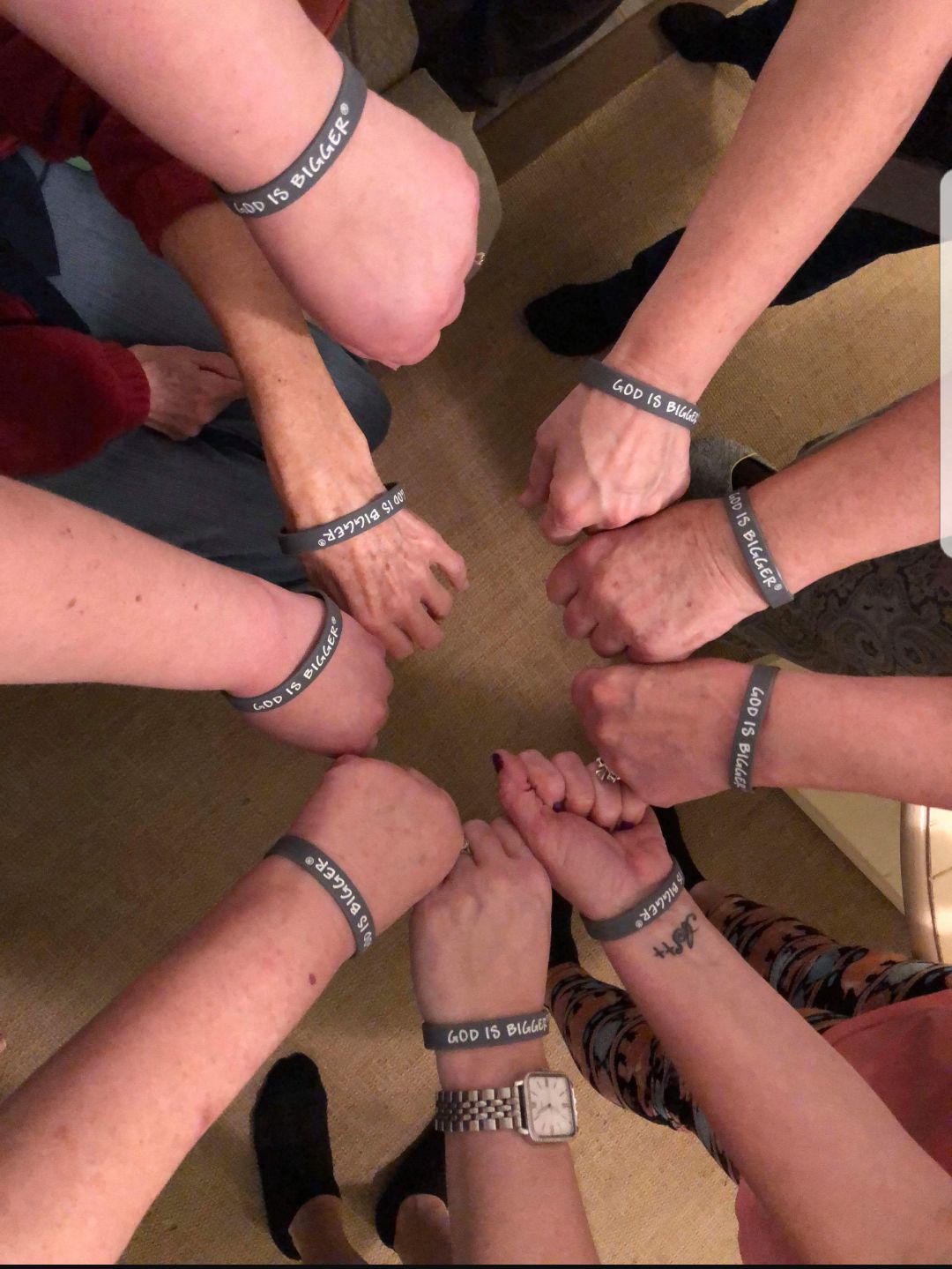 TRUSSVILLE – One year after Rachel Shaneyfelt’s passing, the Trussville-based nonprofit she founded carries on thanks to efforts of her family, friends, and volunteers. The movement functions independently of any church or specific denomination and boasts the mission “To bring hope to a broken world.”

After being diagnosed with Mesothelioma, Shaneyfelt had gone to her doctor for a biopsy. The lesion in question had shrunk so much that the need to proceed with the biopsy came into question. She credited God for the good report by commenting on how God is bigger than cancer.

Her doctor flippantly responded, “You should go get a t-shirt made that says that.” Not only did she have a t-shirt made for herself, but also for everyone working on the same floor of the hospital with the doubting doctor.

Shortly after, requests for additional shirts began flooding in. Once the production of the shirts became too cost-prohibitive, Shaneyfelt turned to more economical silicon bracelets. Within one week her small group had distributed the entire initial order of 1,000 bracelets and were asking for more. From there, the movement continued to gain momentum through the formation of a 501(c)3 and began doing various fundraisers to pay for production and distribution of God Is Bigger merchandise.

The gray silicon bracelets reading simply, “God is bigger” continue to be the most popular method of distributing the organization’s message.

Roger was supportive when Shaneyfelt began the movement, but confesses that he initially saw it as a place for sister to focus her energy while battling cancer.

“Seeing the bracelets now is a representation of her because it was all of her energy. When I see someone I don’t even know walking around with the bracelet on and it reminds me of her. I know that Rachel’s motivation was behind that and it reminds of her like she’s not even gone,” shared Roger.

While Roger speaks fondly of his sister’s determination, he confessed that it could also force him out if his comfort zone at times. The bracelets were intended as a tool to encourage, but also to start a conversation about Christ.

“I’ll be honest. I’m still a little uncomfortable witnessing to people, but Rachel wouldn’t pass up an opportunity. She didn’t care how uppity and snooty a person was, she’d still push that bracelet on them. Or we’d go through a drive-thru and she’d throw those things through the drive-thru window! She wanted people to know that there was hope no matter what and she did that until the very end,” recalled Roger.

“She taught me how to face things head on with her determination. But she also taught me how to pass away with respect. She had difficult days where she was very human and experienced pain, but even Christ asked for the cup to pass him. She stayed strong and suffered through surgeries and chemo, but her faith held tight always. She never wavered in her faith even once.”

The average life expectancy for a person diagnosed with Mesothelioma is 12-21 months. Rachel Shaneyfelt passed away Aug. 26, 2017 as one of the longest surviving victims of Mesothelioma on record after a battle that lasted 6 years, 4 months and 5 days from her initial diagnosis.

In preparation for her passing, Shaneyfelt asked her cousin and brother to continue the movement. In addition to fundraising through the sale of message-oriented merchandise and other initiatives, the volunteers felt that a fishing tournament may garner more participation than the Thankful Run that was offered in previous years.

The God Is Bigger Movement Bass Fishing Tournament will be held Saturday, October 20th at Lakeside Landing in Pell City. All proceeds from the tournament will be used for the sole purpose to continue spreading reminders worldwide that “God is bigger.”

Entry fee is $100 per boat with over $4000 guaranteed prize money to 13 winning places. Prize drawings at the weigh-in event include Costa sunglasses, a custom-made GIB bass fishing rod, fishing apparel, tools, and gift cards from local stores. For anglers that lack confidence about their catch for the day, a $100 no-weigh drawing is also available.

The God is Bigger Movement is also looking for tournament sponsors. A monetary or merchandise donation valued at $250 will earn promotion on GIBM social media sites as well as on a banner at the tournament site. For sponsorship information, contact gibmovement.email@gmail.com.

To date, the God Is Bigger Movement has distributed over 450,000 bracelets worldwide. Donations made support the production of GIB merchandise as well as the distribution of items, such as packages of bracelets carried by missionaries to countries where Christianity is not the primary religion.

To register for the tournament, order merchandise, make a donation or for additional information, visit www.gibmovement.com. For more updates about the fishing tournament or ongoing updates about the ministry’s progress, follow God Is Bigger Movement on Facebook.