BIRMINGHAM – A man and woman traveling through Alabama were arrested last Wednesday for trafficking Marijuana. 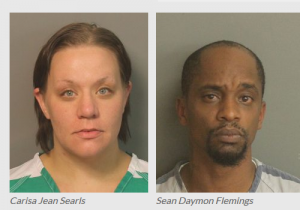 Just after 2:00 am that morning members of the Jefferson Couty Sheriff’s Highway Safety Unit stopped a red Chevrolet Monte Carlo for speeding along I-22 near mile marker 133. The car was occupied by the male driver and a female passenger. The driver told deputies that they were traveling from Oregon to Atlanta, Georgia.

While speaking with the driver deputies smelled a strong odor of marijuana coming from the interior of the car. A search of the car revealed two trash bags containing a total of twenty-six pounds of marijuana with a street value of $46,800.00.