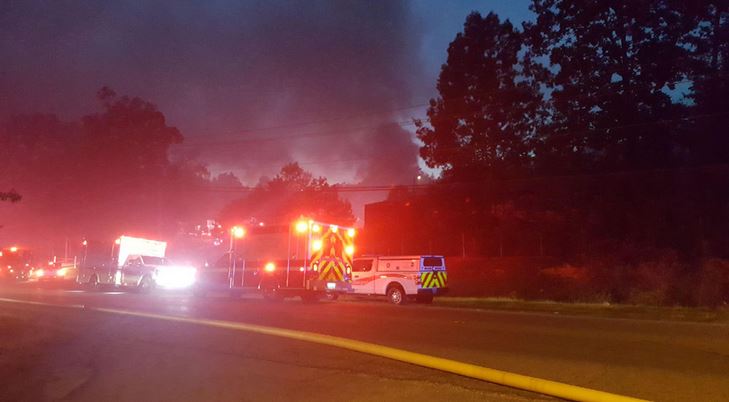 CENTER POINT – A massive industrial fire is raging at Marco Incorporated, a 15,000 square foot building at the corner of Carson Road and Red Hollow near Highway 79 in the Center Point area.

Carson Road, near the incident, has been blocked off to traffic.

Marco Incorporated is a manufacturer of technical furniture, or furniture that can be used to facilitate the type of equipment that is used by air traffic controllers and television studios.  They have vendors across the country and ship products all around the world.

According to owner John Matthews the company has been in business for 45 years and has been at the Carson Road location since 1995.  They employ between 8 and 10 individuals.  Matthews believes it will be a year or more before his business recovers from the fire.

Witnesses have reported that the building has been on fire since around 5:30p.m.

The Center Point Fire Department was the first to respond to the blaze.  They are being assisted by both the Fultondale and the Birmingham Fire Departments.

This is an ongoing story, additional information will be provided as it becomes available.