HOOVER — On December 14, 1819 Alabama became the 22nd state in the union. To mark the upcoming bicentennial Alabama 200 was established.  The three-year-long odyssey, into the people, history, and locations of the Yellowhammer State, will be making its way to Hoover this evening with a special art exhibition. 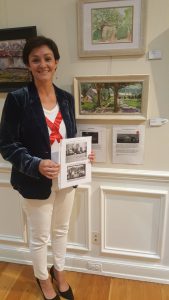 Amy Peterson of Trussville has three paintings on display in the Alabama 200 art tour.

Alabama Then and Now is the name of the show and as, artist and co-chair of the project, Amy Peterson explained, “It is an art exhibition commemorating Alabama’s bicentennial. The exhibition is traveling to ten different cities around the state.  The first venue that is hosting the exhibition is Aldridge Gardens in Hoover.  From there it will go to nine other cities.”

Peterson continued, “Each venue is going to host the show for four to six weeks.  It goes as far north as Huntsville and as far south as Mobile.  It will be in the state capital of Montgomery next April.  An exhibition location will be within driving distance to most people in the state.”

The idea for the project came from a group that Peterson has been working with for years, Alabama Plein Air.

It is the general practice of the group to hold a jury show every two years, however, with the bicentennial coming up it seemed like the perfect time to do a show celebrating the 200th anniversary of Alabama’s statehood.  The group was keen to do the project in connection with the celebrations already taking place with the Alabama Bicentennial Commission.  They applied for an official endorsement and received it.

Planning for the project started early in 2017.   Owing to the limited capacity of some of the venues, that will be displaying the work, the number of paintings was kept to 30 with each one capturing a location that is significant to Alabama state history.

Although she is a co-chair of the event Peterson was allowed to submit her work for exhibition, as any other artist would, and ended up contributing three pieces to the show.

One of her submissions is a Trussville Cahaba Project piece. Of the painting, Peterson said, “My Trussville painting is from a scene only a block away from where I live.  It is something I see almost every day when I walk the kids and the dog.”

The picturesque nature of the location would have been enough to convince Peterson that it was worthy of painting, but the history behind the area is just as powerful as it’s beauty.  “It is a beautiful scene. I wanted to paint it for that reason alone, but the Cahaba Project being a federal housing project links that Alabama history to national history.  The Cahaba Project is tied to coming out of the great depression, the Works Progress Administration and, as I recently learned from a neighbor, Eleanor Roosevelt had some input in the mall being created here as part of the planned community, and that it was meant to be reminiscent of the mall in Washington, DC. I absolutely loved learning that little tidbit.”

Peterson continued, “The painting was also special to me because I painted it the day before my son started kindergarten and a few days later one of the large oak trees that can be seen in the painting was cut down.  I don’t know why the tree was cut down, but one of the things about plein air painting that is so important is that you are recording something from life.  You are documenting a place in time.”

Peterson also noted how excited she was that Trussville was also being showcased in an exhibit that celebrated not only Alabama but 200 years of it, “I’m just thrilled that Trussville is represented among the 30 paintings.  I think that is pretty special, but it is deserved.”