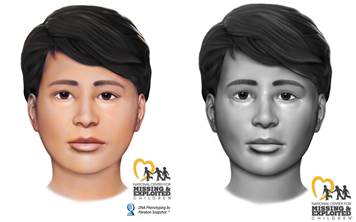 The boy was between 9-12 years old and was found under a billboard sign along a service road near I-85 in Orange County. Law enforcement believes he was deceased for several months, likely left along the road during the summer of 1998.

Based on recent forensic pollen and chemical isotope testing authorities do not believe the boy was originally from North Carolina. Tests suggest the child was from the U.S. Southeast with a narrow focus on Alabama and Georgia. 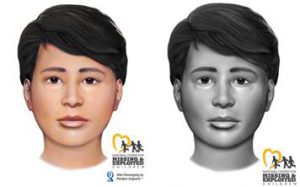 After two decades, this John Doe still does not have a name. But NCMEC is hoping DNA phenotyping will help finally identify this boy. This process uses DNA sequencing to predict what a person might look like.

DNA phenotyping performed by Parabon has determined that this John Doe is of mixed East Asian and European ancestry. He had light brown or fair skin color, brown or hazel eyes and black hair.

Ancestry data suggests that his father is most likely of European descent and his mother is likely of East Asian descent.

A NCMEC forensic artist created a 3D facial reconstruction of the child (above) using a CT scan of the skull and applied the phenotypic traits revealed by Parabon’s DNA Snapshot analysis. This new colorized image is being released in hopes someone recognizes the child and comes forward with information.

If you have any information on this John Doe, please call the National Center for Missing & Exploited Children at 1-800-THE-LOST.