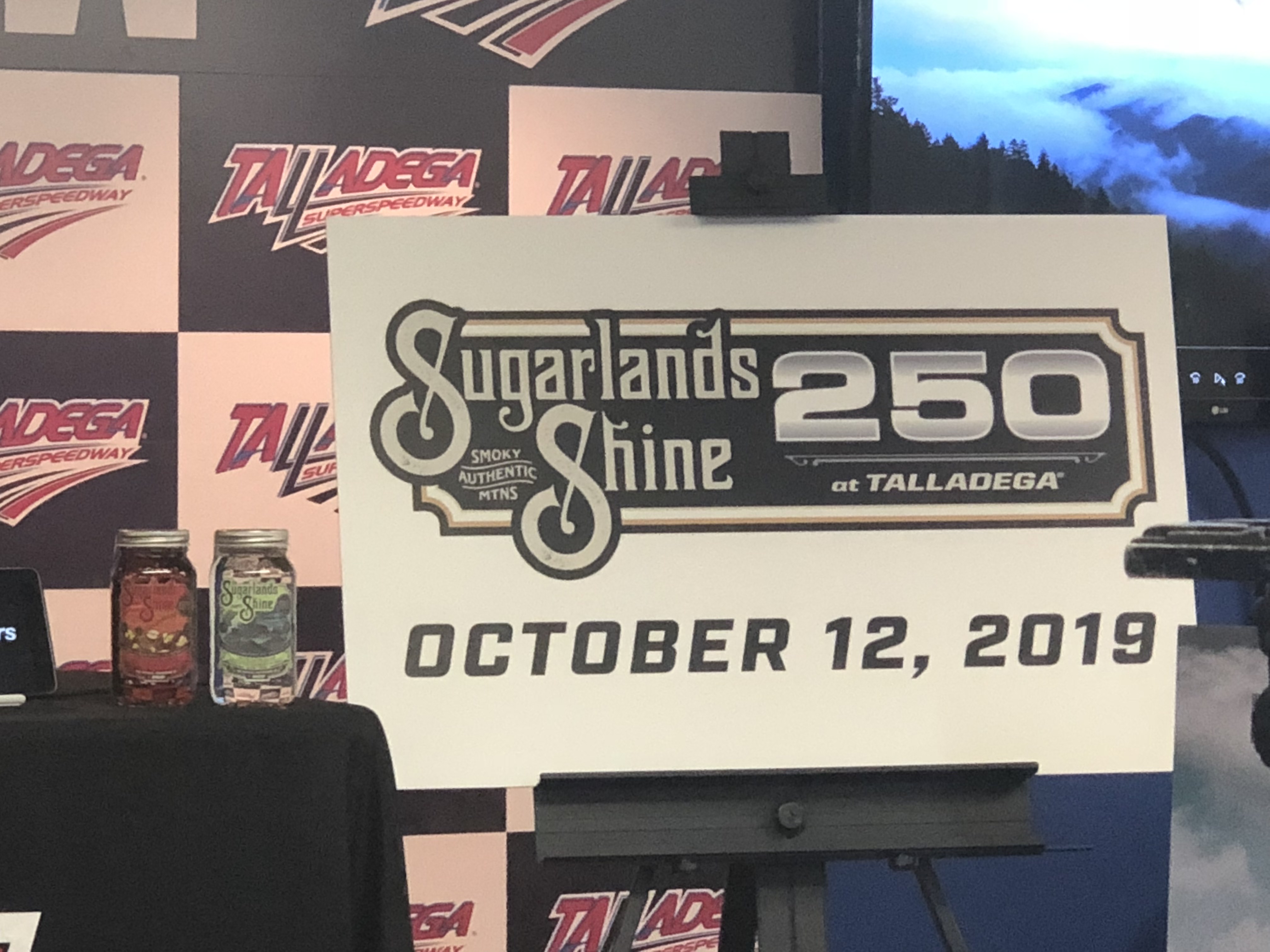 TALLADEGA – A new partnership between NASCAR and an award-winning moonshine distillery, Sugarland Distilling Company, LLC., was announced on Friday, October 13, during the NASCAR Playoff double-header weekend at Talladega Superspeedway. The new partnerships designate Sugarlands Shine as the “Official Moonshine of NASCAR” and as the title partner of the NASCAR Gander Outdoors Trucks Series 2019 fall race, the Sugarlands Shine 250.

Sugarlands Distilling Company, LLC., produces high-quality craft moonshine and since opening its doors in 2014, the distillery has won more than 20 awards for superior taste and quality. The distillery in downtown Gatlinburg, Tennessee, is a popular attraction with more than one million visitors each year. In its fourth year of business, Sugarlands saw a 50% annual growth in distribution sales and expanded its distribution area to 24 states. Sugarlands Distilling Company is one of America’s top-rated distillery experiences and the number one “thing to do” in Gatlinburg, according to Trip Advisor.

“Moonshine is deeply rooted in the history of racing, so partnering with NASCAR felt very natural for us,” said Edward Vickers, President of Sugarlands Distilling Company. “This partnership is our first venture into the sporting industry and we’re excited to extend our brand to NASCAR’s passionate and dedicated fan base.”

As a part of the five-year agreement with NASCAR, Sugarlands will gain rights to promote its moonshine at retail, on packaging and will host key customers and distributors at-track. Additionally, Sugarlands is kickstarting the partnership with a ‘Beyond the Checkered Flag’ sweepstakes. The grand prize winner will experience VIP access at a NASCAR race, entry to the Sugarlands hospitality tent, travel accommodations and more. Fans can visit www.Sugarlands.com to enter and learn more about the sweepstakes.

“Moonshine is one of the fastest growing spirit categories in the country and we are excited to help introduce Sugarlands’ award-winning product to our brand loyal and national fan base,” said Jon Tuck, Chief Revenue Officer, NASCAR. “There is an authentic connection between our two brands and we are confident our fans will embrace the historical association.”

“Sugarlands is a natural fit for Talladega Superspeedway and we are thrilled to have them join our team,” said speedway Chairman Grant Lynch. “There are many old-time tales here about the good ol’ days when running moonshine in and around Talladega was happening, and our partnership with Sugarlands and the Sugarlands Shine 250, those stories will come back to life. There isn’t another venue in motorsports that has fans as loyal as ours, and I know they will love Sugarlands.”

Sugarlands recently announced a partnership with country music’s rising star and NASCAR fan, Cole Swindell. Swindell will be releasing his own Sugarlands Shine flavors starting with a Peppermint Moonshine which hit the shelves in liquor stores across the country, online and in Sugarland’s distillery this month. Swindell is currently working with Sugarlands to create a new recipe to be released in the new year.

The trucks are in action today, Saturday, October 13, for the Fr8Auctions 250, where the field of eight championship-eligible drivers will be trimmed to six, at noon CDT. The race will be followed with Monster Energy NASCAR Cup Series Foodland/Food Giant Qualifying for Sunday’s 1000Bulbs.com 500. It will serve as the second of three races in the Playoff Round of 12, and cars are scheduled to take the green flag at 1 p.m. CDT.