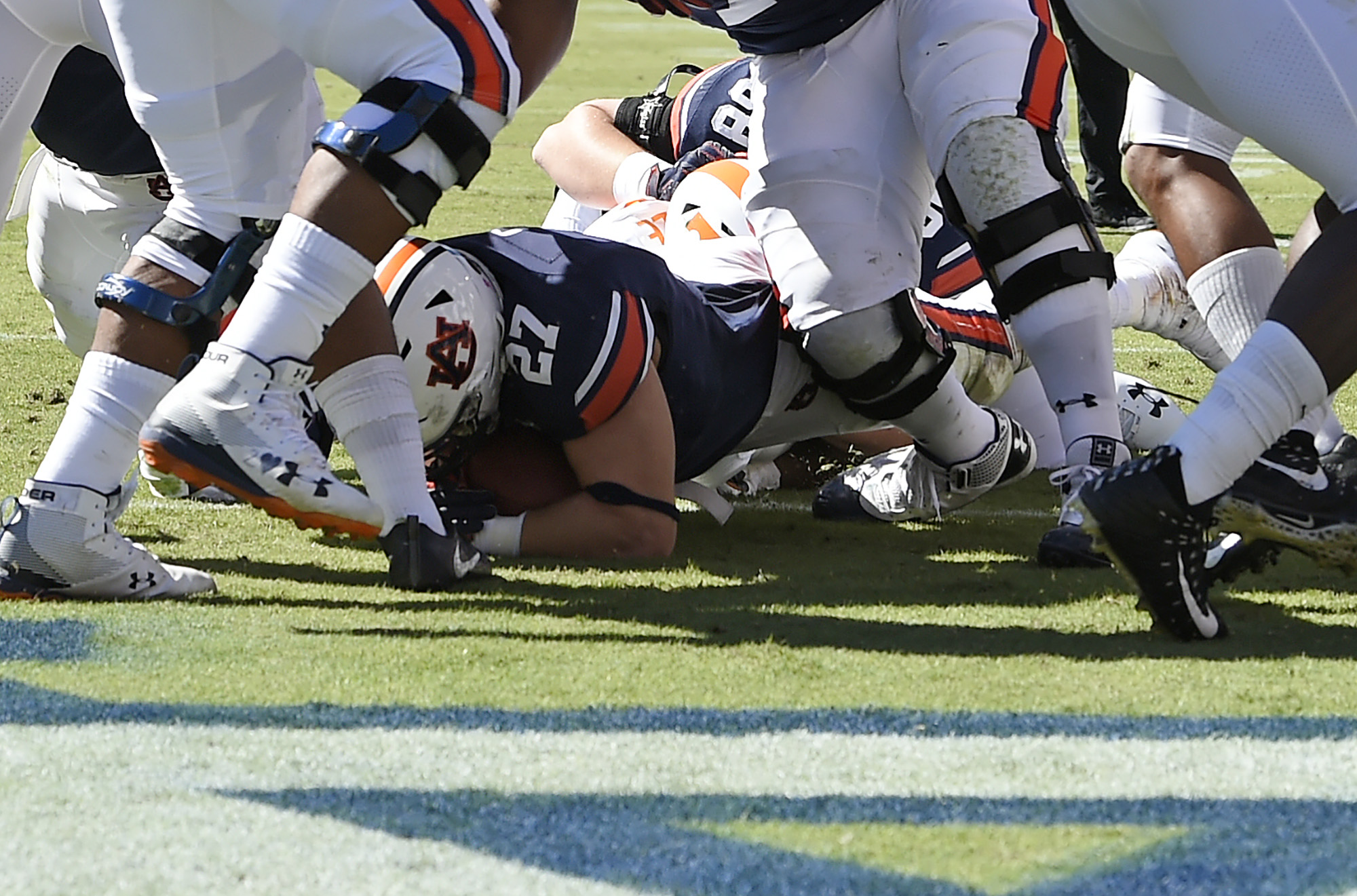 Auburn's Chandler Cox scores a touchdown in the first half. Tennessee at Auburn on Saturday, Oct. 13, 2018 in Auburn, Ala. Todd Van Emst/AU Athletics

AUBURN, Ala. – Anthony Schwartz flashed his world-class speed on the Tigers’ longest play of the season but Tennessee defeated No. 21 Auburn 30-24 Saturday at Jordan-Hare Stadium.

“Very tough loss, very disappointing,” Auburn coach Gus Malzahn said. “I really felt like we would come out and play our best game. We got off to a good start, things were going good. Our kids fought to the end. I’m proud of our kids’ fight. We give Tennessee credit and congratulate them.”

Auburn started fast, driving 75 yards, mostly on the ground, on the game’s opening possession with Chandler Cox’s 1-yard touchdown putting the Tigers up 7-0.

The Tigers were 3-for-3 on third down on the drive, with Jatarviious Whitlow moving the chains each time. After Schwartz gained 17 yards to Tenessee’s 3, Cox scored his second career rushing touchdown two plays later.

After Tennessee answered with a field goal, Auburn responded with a 20-yard Anders Carlson field goal to lead 10-3 after the first quarter.

The Volunteers tied it at 10 on a 42-yard yard touchdown pass from Jarrett Guarantano to Ty Chandler early in the second quarter. Guarantano completed 21 of 32 passes for 328 yards and two touchdowns.

After Auburn’s defense forced a three-and-out, Jarret Stidham found Schwartz on an out route. The freshman track star broke a tackle then raced down the Auburn sideline for a 76-yard score to give a 17-10 lead with 3:26 left in the first half.

After the dash by “Flash,” Tennessee kicked a field goal, trimming Auburn’s lead to 17-13 at the half.

Late in the third quarter, the Volunteers took a 20-17 lead on a 25-yard pass to Jauan Jennings, then scored again 51 seconds to take a 10-point lead on Alontae Taylor’s fumble return.

Seth Williams caught a 14-yard touchdown pass with 37 second left to make it 30-24, but Tennessee recovered the onside kick to secure the win. Williams led Auburn with 85 receiving yards on five catches.

Stidham was 28-for-45 for 322 yards, two touchdowns and two interceptions.

“I’ve got to do a better job, got to hold onto the ball, not turn it over,” Stidham said. “It’s not fun losing like this, but like I’ve said, our guys, they’re hungry to get better every week. I know, collectively as a team, we’re going to stick together. We’re going to block out all the outside noise, and we’re just going to continue to grind for each other like we have all along.”

Marlon Daividson blocked a field goal for the second straight week. Auburn had three sacks and 10 tackles for loss. Deshawn Davis led Auburn with 10 tackles, including a TFL.