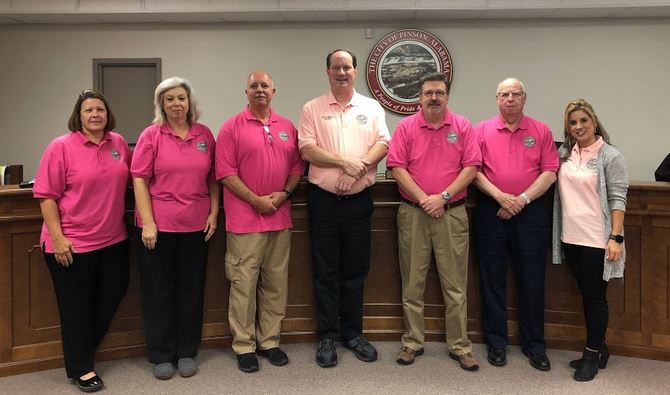 PINSON — The Pinson City Council met on Thursday.  After preliminary business was attended to the council was addressed on a matter of new law, called the Coach Safety Act, which will apply to volunteer coaches.  The new rules will require that the volunteer coaches can show proficiency in the following areas:

The council was next addressed by Senator Shay Shelnutt.  Shelnutt presented two checks to the council.  The first check was in the amount of $10,000 and was specified to be used for when the Pinson Valley Marching Band travels to New Orleans for a New Years Day competition during the half-time of the Sugar Bowl. The second check, also in the amount of $10,000, was specified for use by the Turkey Creek Nature Preserve.  Both checks were made possible by grants from the Jefferson County Community Service Fund.

In honor of Breast Cancer Awareness month, each member of the council wore a pink polo shirt to Thursday night’s meeting.  The shirts, since the council is not allowed to donate to the cause, were to show support for all those that have been impacted by the disease, as well as to signal solidarity for efforts to raise awareness and funds to find a cure.