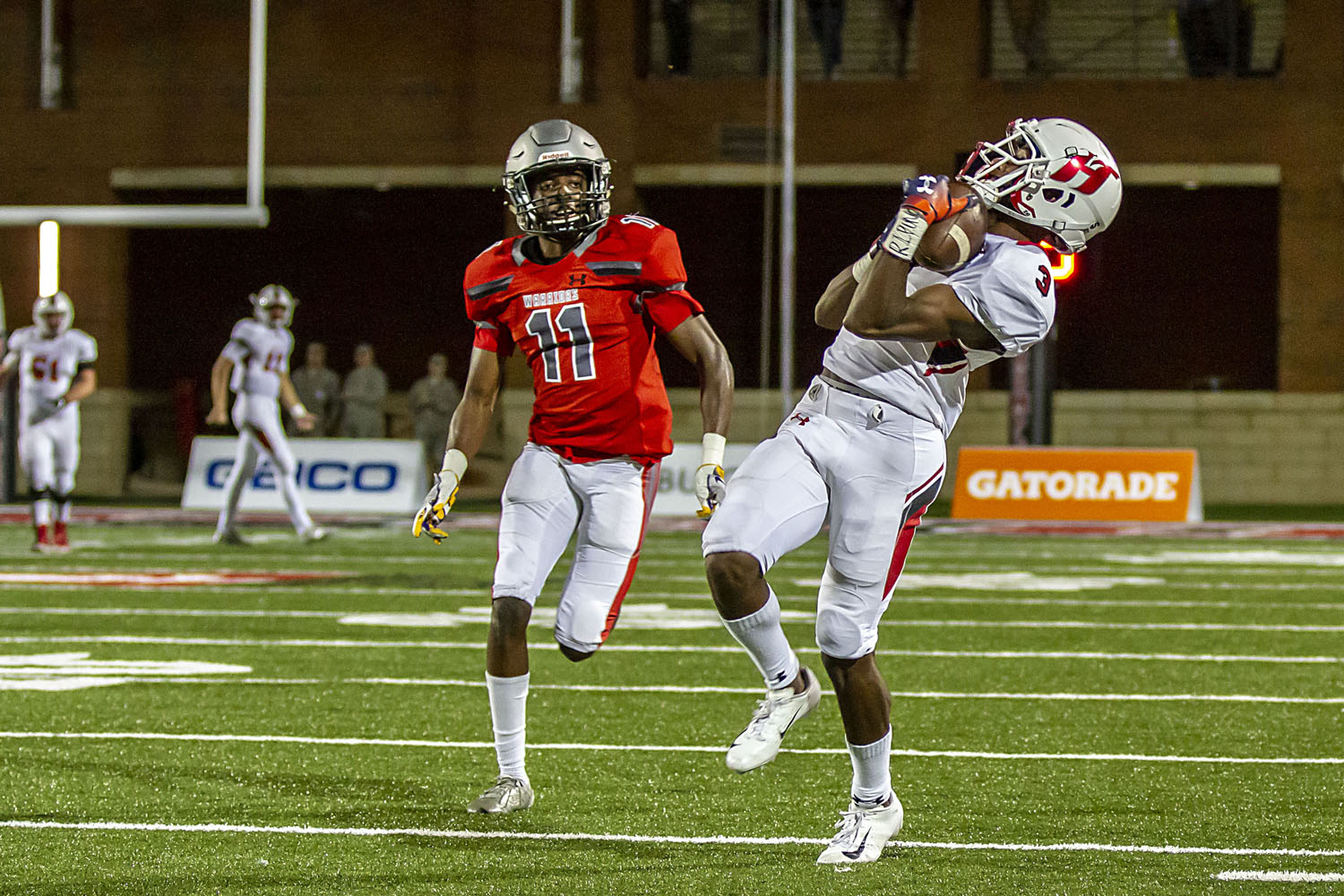 ALABASTER— If you were expecting a high scoring game, you got exactly that in the Hewitt-Trussville and Thompson matchup. The Huskies got out to a 28-0 lead early but saw it dissolve and ultimately turn into a loss as Thompson claimed victory 63-49.

The scoring started early and often for the Huskies as quarterback Paul Tyson found Ja’Varrius Johnson for a seven yard touchdown to take a 7-0 lead with 9:50 left in the first quarter. After a defensive stop from the Huskies they jumped out to a 14-0 after a one yard sneak from Tyson.

The Husky defense stood tall once more and gave their offense another great shot in putting it in the endzone, which they did after a nine yard run from Armoni Goodwin to make it 21-0 still in the first quarter. The game seemed to be heading in the Huskies favor.

Thompson quarterback Tulia Tagovailoa got the Warriors on the board after an explosive run to cut the deficit 28-7. After a Husky punt, the Warriors struck again this time a pass from Tagovailoa to JB Mitchell from 19 yards out to make it a 28-14 game.

The kickoff after the touchdown, Ja’Varrius Johnson made his presence felt again as he took it 99 yards for a touchdown to increase the Husky lead 35-14 with 3:45 left before halftime.

Thompson did answer back after another Tagovailoa touchdown run to trail at the half 35-21.

The second half was all Thompson as they looked unstoppable coming out after the halftime break. The Warriors took their opening drive down the field and found the endzone after an 18 yard touchdown run from Shadrick Byrd to cut the lead down to seven trailing only 35-28 with 7:55 in the third quarter.

The Huskies offense looked extremely sluggish and looked like a shell of themselves in the third quarter and the defense was outmatched by the explosive Thompson offense. With 53 seconds left in the third, The Husky lead was no more as the Warriors tied the game 35-35 after an eight yard touchdown run from Jarrett Crockett.

The fourth quarter was an epic ending to an amazing game. The Thompson Warriors gained the 42-35 lead after another Shadrick Byrd touchdown with 8:05 left in the contest.

The Huskies were not to be denied after Paul Tyson found Dazalin Worsham for a one yard touchdown strike to tie the game up 42-42 with 6:05 left in the game.

Just like boxer, the Warriors came back swinging after Byrd took another run for a touchdown. His 42 yard run gave the Warriors the lead once again 49-42 with 5:10 left in the game. The Huskies had their backs against the wall once more.

The Huskies gained possession and capped it off with a 17 yard touchdown run from Sean Jackson to tie the game once again at 49-49 with 3:28 left.

The Warriors then took the lead after an exceptional 59 yard pass and catch from Tagovailoa to Mike Pettway to take the lead 56-49 with 1:40 left in the game.

The Huskies got the ball and looked to drive it down to tie the game, but those plans, along with the football slipped out of the hands of Ja’Varrius Johnson from a Tyson pass that was deflected then landed in the hands of Thompson’s D.J. Douglas for the interception with 1:12 left in the ballgame.

Tagovailoa took a long run down to the Huskies’ one yard line and Crockett finished the deal for the Warriors by punching in a one yard touchdown to give the Warriors the 63-49 win for Thompson as the Huskies were unable to reach the endzone on their last possession.

With the loss the Huskies fall to the number 4 seed in the playoffs and will have to travel in the first round to James Clemens.

Paul Tyson finished with 14 for 23 with 275 yards passing and three passing touchdowns. He also added one rushing touchdown.