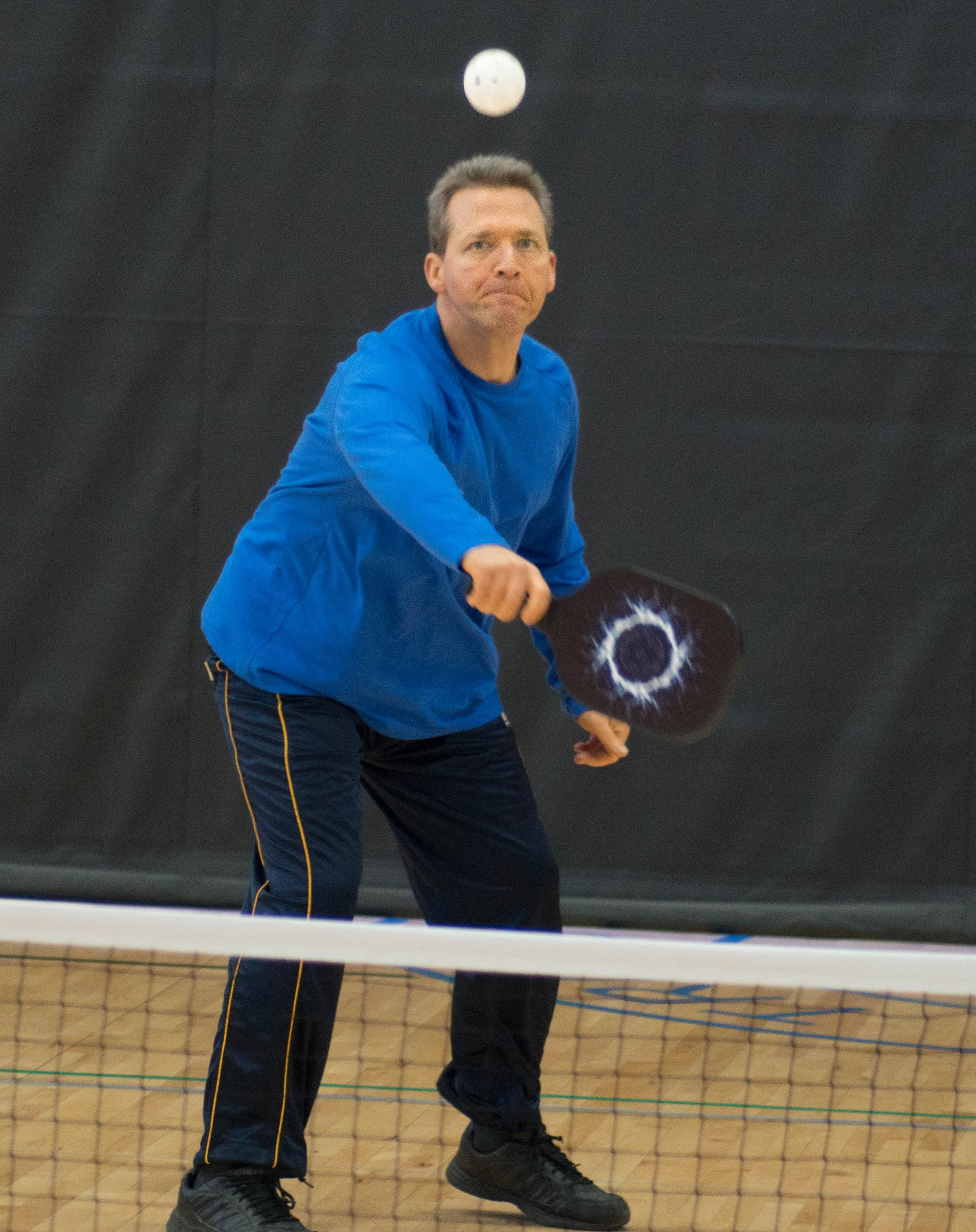 One of many pickleball players who stay active in the sport at the Trussville Civic Center.

Springville among growing number of communities to offer pickleball

SPRINGVILLE – Two men attempting to remedy summertime boredom for their families went about the business of erecting a badminton set. Undeterred when they couldn’t locate all necessary play equipment, they instead employed ping pong paddles and a wiffle ball. After dropping the net height and slightly modifying badminton rules, the families’ malady was cured.

Over 50 years have passed since that innovative afternoon and pickleball is continuing to grow in popularity, making its way into the Trussville area within the past few years.

Trussville Parks & Recreation Director David Vinson shared, “We started playing the game at the Civic Center about three years ago. Originally, we taped off one court in the gym. But it became so popular that we added another, then another and another. When we redid the gym last year, we had lines painted for six courts. We’ve also added three outdoor courts at our Racket Club and one to the courts on the mall.”

Vinson noted that the popularity in Trussville hasn’t plateaued yet. “Most of our players are older and they’ll play all day. The court is smaller than tennis, making it especially popular among those watching the impact on their knees.”

The development of a league hosted at the Civic Center is under consideration, as well as plans to host a training clinic in the near future, both of which will be announced online at TrussvilleParks.org.

Ashley Lyons has served as Springville’s Parks & Recreation Coordinator since August and has spearheaded the initiative to add a permanent outdoor court to Big Springs Park.

“At my previous job in Salt Lake City Utah, the popularity was overwhelming. It’s a way for all age groups to be active and find a hobby they enjoy. In Springville, we don’t currently have a lot of opportunities for recreation specifically for adults, so this will be good for the community,” offered Lyons.

Lyons said that once the court construction is complete, she plans to offer an Opening Day event with a training clinic. The event will be announced via the recently-created Springville Parks & Recreation facebook page, @springvilleparksandrec as well as on springvillealabama.org.

“We watched a training at the Racket Club one day and decided to give it a try,” explained Trussville YMCA Sports Director Jarvis Jones. Originally taping off court lines, the YMCA also included permanent painted lines when their gym floors were redone last year.

While the sport often appeals to individuals wanting to stay active while also limiting impact on their joints, pickleball is also increasing in popularity among younger crowds. “We’re seeing more and more teenagers get involved. They’ll watch it be played then once they give it a try, they love it and some have even joined our league.”

Jarick Rager was first introduced to the sport in 2012 while visiting his parents in Tennessee. “My brother and I tried to play it like tennis when a very kind woman spent about thirty minutes teaching us how to play. I fell in love with it right then and have been playing ever since.”

Rager is now one of two certified pickleball instructors in the state of Alabama, offering clinics and private lessons. A listing of fees and training options are available through his website, TrussvillePickleball.org, as well as local open play times and locations.

A software developer by trade, Rager’s company created an app for iPhone and Android called PickleUp, which allows people to coordinate pickup games of pickleball. After a 30-day free trial, proceeds from the $1.99 app fee are donated to Children’s Hospital of Alabama. Though it launched just six months ago, over 200 pickleball locations nationwide have already been registered through the app.

“People don’t usually need to have the equipment or a paddle or anything to give it a try. They can use the app, show up, and whoever is playing will usually have an extra paddle they can use. We’ll get them started and they’ll be playing within about ten minutes.”

Cost for two paddles and ball range anywhere from $20 to over $100 and are available at local sports retailers and online.

“The pickleball community is different than any other sport, and I grew up playing every sport known to man and this is just a really inclusive and welcoming group of people,” noted Rager.

Earl Pickett has been playing for about eight months and offered, “I like the competitiveness and it’s a pretty good workout.”

“I love to bowl, but this is more active and keeps your adrenaline up a good bit. My husband and I used to play a lot of sports and it’s helped me get back involved since he passed away,” shared Judy Jones.

Sandy Green echoed the sentiment, “I only knew one other person in here when I started playing in February. But now, these are our people. Last week, about nine pickleball people joined me for Bingo. We’ve been to the movies and meet up for dinner sometimes. So it has really created tons of friends and relationships,” shared Sandy Greene.