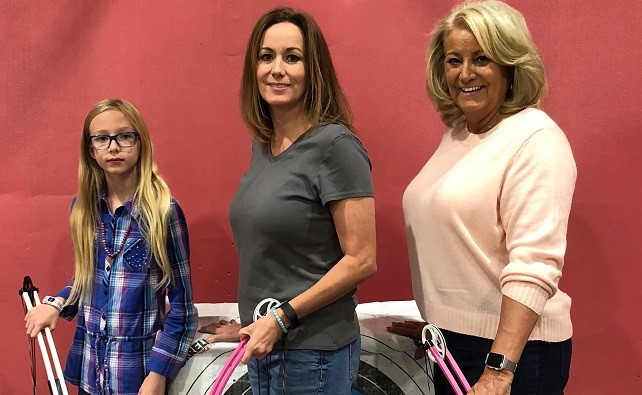 Their aim is true: Three generations of Trussville ladies give archery a shot

By Shaun Szkolnik for the Trussville Tribune

TRUSSVILLE – When you think of sports in the South the first thing to come to mind is college football.  However, believe-it-or-not, there are other activities out there; even during the months of September through January. 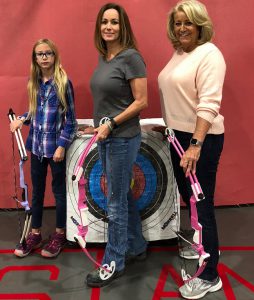 Archery is just such an activity and, as three generations of Trussville ladies -grandmother, mother and daughter- have learned for themselves, when it comes to fun, family and friendship, archery is right on target.

As archery mother Amanda Kontzen explained, “I’d been shooting archery for a couple of years when they began to offer this class.  I thought I’d sign us up for a mother/daughter class.  Chloe [the daughter] really liked it so we’ve just continued on and then my mom signed up with us.  Since then all three of us have been taking it.”

Amanda’s mother, Mattie “Honey” Gray, brought a lot less experience to the range but has more than made up for it over the last year.  “It took me a good three classes before I felt like I knew what I was doing, but I love it.  It is a lot of good exercise too.  People don’t realize how many muscles you use in this sport.”  Gray also said that her most interesting time in archery came when, “… I hit the center of the target for the first time.”  She added, “It is a good family experience for all of us to get to shoot together.”

The youngest of the trio is Chloe Kontzen.  She is in fourth grade and plans on sticking with the sport of archery for a very long time.  She is especially proud, remembering her time in a local tournament, when she says, ““I was in third place in my group.”  That is a group that includes participants that are much older than she is.

As her mother says, “You can see that she has really grown and she has gained a lot of confidence and especially when we go to competition. It was great watching her go against a teenager that was twice her size.  They were shooting at the same target and she actually held her own with him.  That is pretty impressive.”