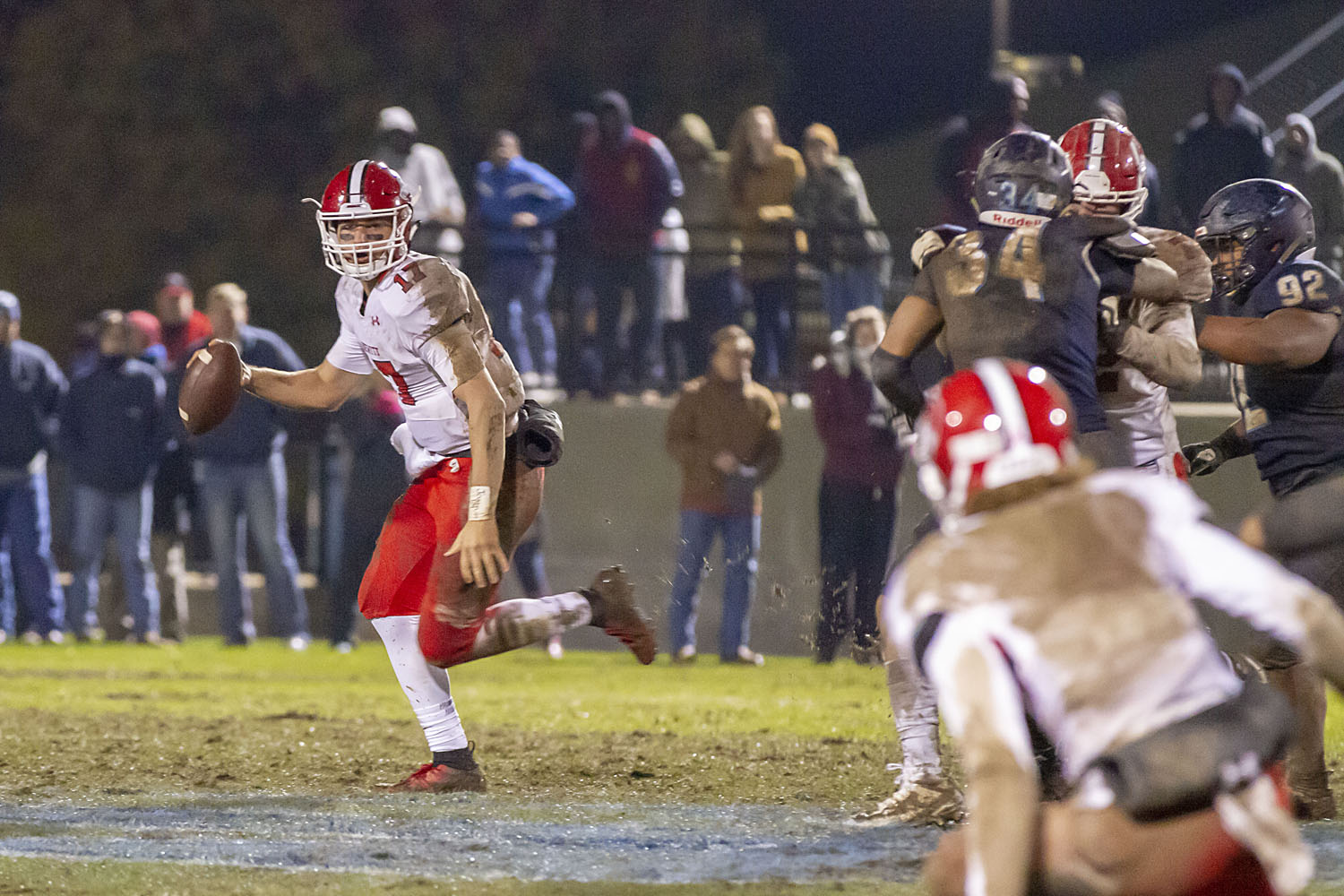 MADISON, Ala. – As time ticked down, Jamyre Reese hauled in a Paul Tyson bullet across the middle to score the game-winning touchdown to defeat the ninth-ranked James Clemens Jets, 43-41, and send the Hewitt-Trussville Huskies on to the AHSAA Class 7A Playoffs quarterfinals for the third-straight year.

Reese’s catch from 9 yards out came with 14.9 seconds to play and capped a back-and-forth battle on the sloppy turf at Madison City Schools Stadium.

The win avenges a 2015 first round playoff shutout loss at James Clemens and sets up a return to Alabaster next week to face the No. 2 Thompson Warriors (9-1) in a rematch of the Huskies’ regular season finale loss, 63-49.

Sixth-ranked Hewitt (8-3) opened the game with a long drive inside the red zone, but suffered a setback when Parker Colburn’s 36-yard field goal was blocked. The Jets responded with a drive of its own to go up 7-0 on a Jamil Muhammad 1-yard touchdown. The TD was set up by a 35-yard run by Emmanuel Sanders.

Tyson needed little time to even the score, 7-7, hitting Ja’Varrius Johnson for a 56-yard touchdown pass with 3:31 to play in the opening quarter. It was the first of two TD catches and longest of the night for Johnson, who reeled in 12 catches for 159 yards.

James Clemens relied on big plays to take a 20-7 lead early in the second quarter. First came on a flee flicker pass to Dylan Blackburn from 37-yards out late in the first quarter, but this time HTHS came up with the blocked kick, stopping the PAT try, 13-7. The Jets then capitalized on an interception in Husky territory, setting up a 46-yard TD run by Muhammad.

The Huskies closed the gap with 2:30 to play in the first half when Shawn Jackson punched in a 17-yard TD run. Colburn tacked on the extra point to make it 20-14. Hewitt stopped James Clemens twice in the final two minutes, including recovering a fumble on the Jets’ 17 with seven seconds remaining in the half.

With :01 to play in the half, Tyson turned the turnover into points, hitting Johnson for a game-tying touchdown. Colburn gave Hewitt a 21-20 lead at the half.

To open the third quarter, HTHS forced a Jets’ turnover on the kickoff. Once again, the turnover led to points as Amari Goodwin capped the short drive with a 14-yard touchdown run to extend the Huskies’ lead, 28-20.

Aided by a penalty after the touchdown, Hewitt pinned the Jets deep on the kickoff, but dual-threat QB Muhammad proved otherwise. The Vanderbilt commit broke free for a 79-yard run down to the Hewitt 1-yard-line. The stop was short-lived as Muhammad punched the ball into the end zone on the next play, 28-27 HTHS.

Tyson used completions to Dazalin Worsham to put the Huskies in scoring range late in the game, setting up a Colburn field goal to make it 31-27, and then a 13-yard TD pass to regain the lead, 37-34, after a Jets’ score.

After a go-ahead touchdown was called back due to an illegal shift with a minute to play, Tyson connected with Worsham twice more to set up the winning TD – first on a gain to move into the red zone and then a fourth-and-6 pass to the 9 with 20 seconds to play. Worsham finished the night with nine catches for 125 yards.

Tyson completed 25-of-41 passes for 326 yards with four touchdowns and one interception. He also ran for 22 yards.