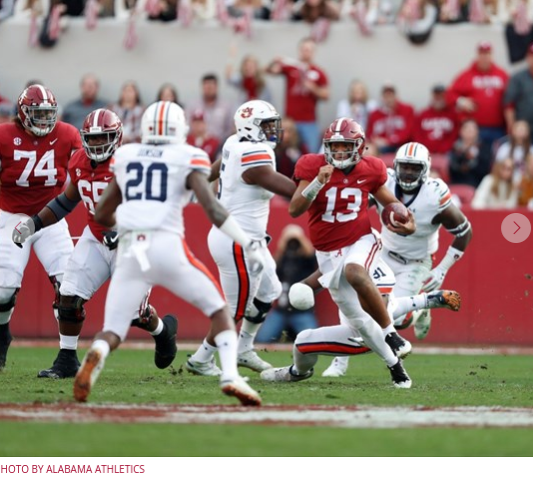 Alabama is Tua much for Auburn, Tide wins Iron Bowl 52-21

Quarterback Tua Tagovailoa threw for 324 yards on 25-of-32 passing and accounted for a single-game school-record six touchdowns – five through the air and one rushing. As a result, the sophomore went from fifth to tied-for-second with John Parker Wilson on Alabama’s career touchdown passes list with 47. 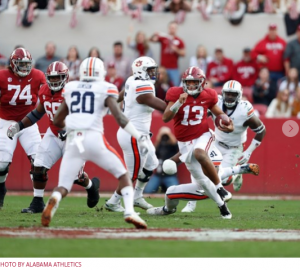 Junior quarterback Jalen Hurts threw one pass on the night, which went to freshman wide receiver Jaylen Waddle for a 53-yard touchdown.

The two sides traded punts to begin the game before the Tide got on the scoreboard in its second possession. Using a short field following an Auburn penalty that placed the ball at the AU 34-yard line, UA needed just five plays to reach the end zone after Tagovailoa bulldozed his way in for a seven-yard score. Following the extra point from redshirt freshmen Joseph Bulovas, Alabama led 7-0 with 6:38 left in the opening quarter.

The Tigers responded on their next drive, going 73 yards in 10 plays, finishing with a nine-yard rushing touchdown from Anthony Schwartz to tie the game 7-7 with 2:37 to go in the first quarter.

On the ensuing Crimson Tide drive, UA answered after a big third down conversion by Tagovailoa in which he scampered for 21 yards to the Auburn 39-yard line to keep the drive alive. Five plays later, Tagovailoa found Ruggs III on a screen pass from four yards out to put Alabama ahead. Bulovas’ extra point made it 14-7 with 14:15 remaining before halftime.

Later in the quarter, Alabama added to its lead when Bulovas converted a 30-yard field goal attempt to cap a 10-play, 57-yard drive and put the Tide up 17-7 with 8:59 left in the period.

The Tigers trimmed the Tide lead after a blocked punt set the Tiger’s up at the UA 23-yard line. Auburn used a trick play to find the end zone when wide receiver Ryan Davis threw a 23-yard touchdown pass to Malik Miller to make it 17-14 with 4:04 left before the half.

The Tide led 17-14 at the halftime break while outgaining Auburn 196-123 in total yardage.

Alabama started the second half with a bang when Tagovailoa dropped a perfect pass to Jeudy for a 46-yard score. Bulovas’ point after attempt capped the five-play, 75-yard drive and extended the lead to 24-14 with 12:57 on the third quarter clock.

The Tide struck again three minutes later after Tagovailoa threw another touchdown, this time going to Jacobs, who made an over-the-shoulder grab for the 33-yard touchdown reception. Bulovas’ extra point was true and Alabama led 31-14 with 9:49 to go in the third.

The Tigers battled back with a 52-yard pitch-and-catch to cut the Crimson Tide advantage to 31-21 with 3:31 left in the quarter.

It took Alabama just over a minute to respond, when Tagovailoa found Smith for his fourth passing touchdown of the game, this time from 40 yards out. The score finished a three-play 60-yard drive and Bulovas’ point after extended the lead to 38-21 with 2:22 remaining in the third.

The points continued to pour in during the fourth quarter with Tagovailoa throwing a 22-yard touchdown strike to Ruggs III who made a leaping catch to add to the Tide’s lead. Bulovas added the extra point and the Tide held the 45-21 advantage with 14:29 left in the game.

The next offensive play for the Tide resulted in another touchdown after Hurts found Waddle streaking down the middle of the field for a 53-yard score. Bulovas’ extra point pushed the lead to 52-21 with 9:29 left in the game, which proved to be the final score.

The Tide returns to action next Saturday, Dec. 1, for a SEC Championship matchup against No. 5 Georgia in Mercedes-Benz Stadium in Atlanta. The game is set for a 3 p.m. CT kickoff on CBS.