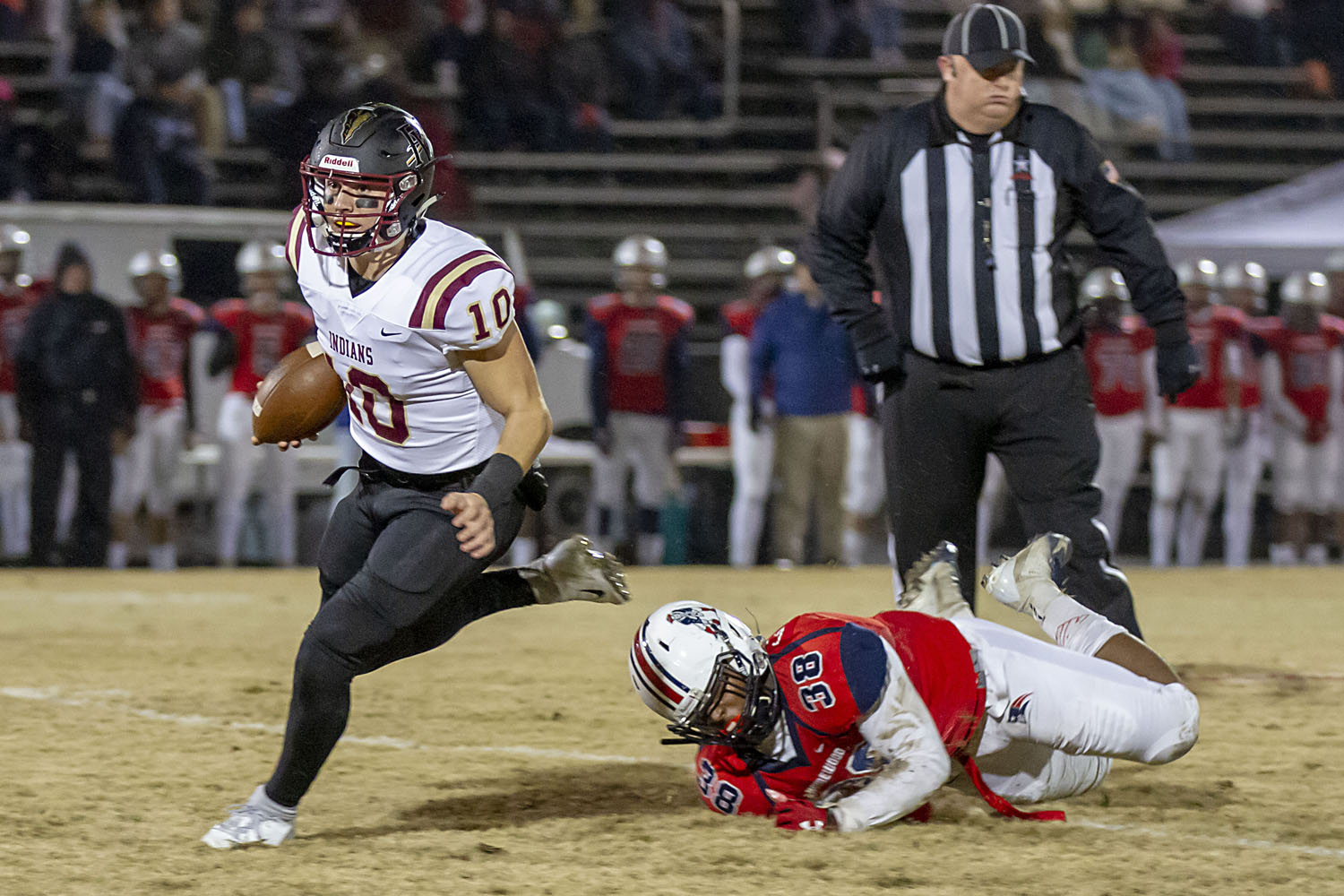 Indians dominate Patriots 48-7, advance to semifinals for rematch against Clay

HOMEWOOD – Not even the weather could help Homewood slow down the Pinson Valley offense in a game that saw the Indians take a 34-7 lead into halftime before adding two more touchdowns in the second half to secure its place in the semifinals of the 6A playoffs with a 48-7 win.

Both teams began the game stingily by forcing a series of punts before Pinson Valley running back Kenji Christian scored on a 6-yard run to give the Indians a 7-0 lead late in the first quarter. On Homewood’s very first play of the next drive, Larkin Williams’ pass was tipped by his intended receiver and picked off by the Pinson Valley defense. Bo Nix hit Demarion Holloman on the next play for a 43-yard touchdown pass to give the Indians a quick 14-0 lead.

For the first time all year, an opposing defense finally recorded a sack on Bo Nix. The problem is, it didn’t slow down the defense even a little. Nix connected with Tye Pouncey with seven seconds to go in the first quarter to put the Indians up 21-0. Nix then added a 47-yard touchdown run to his night on a read-option keeper that put the Indians up 28-0 with a little less than 10 minutes to go in the second quarter.

Homewood did have a brief moment where they looked like they were going to put themselves in a position to get back in the game. With 4:31 to go before halftime, Larkin Williams found Marcus McGhee for the Patriots first touchdown of the night, 28-7.  Homewood executed a beautiful pooch kick and recovered it at the Indians 39-yard line. The Patriots, however, couldn’t convert on a fourth down and the Indians took over at their own 21-yard line. On a third and one, Kenji Christian took the handoff up the middle and broke free for a 69-yard touchdown run to suck any momentum out of the entire stadium. The Indians roll the 34-7 lead into halftime and never looked back.

Nix would add touchdown passes to both Pouncey and Holloman for their second each to add to his day. Nix finished 22 of 33 for 298 yards and four touchdowns on the night. Christian was the Indians leading rusher with seven rush attempts, 85 yards and touchdowns. Holloman lead all receivers with nine catches for 121 yards and two touchdowns. The defense saw Homewood makes several attempts at getting deep into Indians territory, but five times the Patriots were knocking on the door and came up empty handed. Jamari Dailey lead all tacklers with ten total tackles with Rashaan Christian and GaQuincey McKinstry both recorded interceptions in the game.