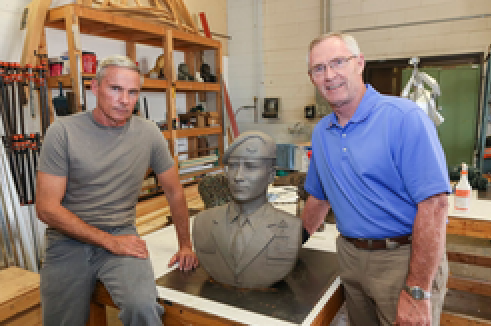 TRUSSVILLE – It is often noted that freedom is not free.  Less frequently observed is that when the bill for freedom comes due, it is not always distributed equally.  This makes it all the more remarkable that there are those among us who will sacrifice everything for their country, their community, their friends and for those they will never know.

Mark Davis, the founder of the Alabama Fallen Warriors Project, has a goal of creating a bronze bust for every Alabama veteran that has been killed since the events of 911.  These busts will then be installed in a place of honor where the community will be able to remember the fallen and contemplate the sacrifice that was made.

“When a military service member dies, he dies two deaths,” Davis said. “One is when he is killed and the other is when we forget him or her.”

The process of creating one of the bronze busts is long and involved.  The family of the veteran will compile a number of pictures of the fallen.  Those pictures will be forwarded to retired USMC Colonel Lee Busby, who will use the photographs to sculpt a three-dimensional bust out of clay.  Once the initial clay bust has been created, Busby will meet with the families. The families will review the work and, after a process of two or three iterations of refinement, the perfected likeness will be sent to the University of Alabama for casting.

In addition to being an involved process, it is also an expensive one.  The complete cost of each bust, including its eventual installation, comes in at $11,000.  The total cost of all the busts that remain to be created and installed is $1,200,000.

One of the ways in which Davis is raising funds is by connecting with local businesses and hosting special events.  One such event was held on Nov. 17 at Sheepdog in Trussville, where sports cars were on display, membership specials and discounts were offered, and for every new membership to Sheepdog, $50 was donated to the Alabama Fallen Warriors Project.

That event held a particular meaning to Trussville because two of the fallen heroes meant to be honored are from Trussville and Clay.

One of these is Sargent Jason Stegall of the US Army.  He attended Trussville-Trussville High School and was deployed 15 months during Operation Iraqi Freedom.  He has been awarded the Meritorious Service Medal, the Combat Infantry Badge, two Army Commendation Medals, two Army Achievement Medals, two Purple Hearts and the Bronze Star with “V” for valor.  He died serving his country on Dec. 14, 2009.

Another of those to be honored is Staff Sargent Michael Hosey, of the special forces. He attended Clay-Chalkville High School.  He served two tours of duty in Iraq and two tours of duty in Afghanistan.  He was awarded the Meritorious Service Medal, the Purple Heart and the Bronze Star.  He died serving his country on Sept. 17, 2011.

It is intended that once a bronze bust has been completed, it will find an appropriate home where the sacrifice it represents can be contemplated and honored.

“It is really up to the family on where it goes,” Davis said. “It should be a place of honor; maybe at city hall, the city library, or at the high school where he or she attended. I am working on an idea for the bust to go to Veterans Park in Hoover or at the Alabama Veterans Memorial Park on I-459.”