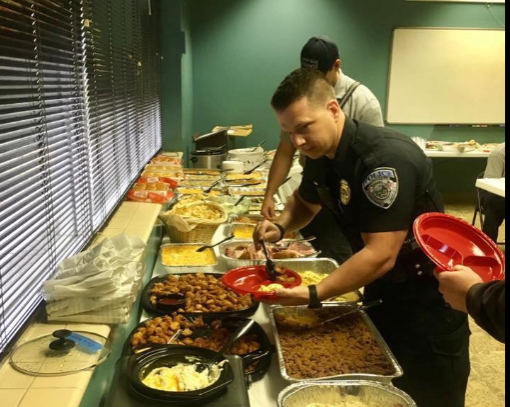 TRUSSVILLE –An act of kindness two years ago was intended to show appreciation for Trussville police officers and firefighters. Now entering it’s third year, it has grown into an annual event for organizer Beverly Cross.

With the help of friends, community members, and some local restaurants, Cross will organize meals for the first responders on all shifts for the first three weekends in December.

“I started this in December of 2016,” Cross said. “At the time, there was a lot of negativity in the media about police. I just wanted our local heroes to know that we appreciate everything they do for us and our little town. We set everything up so it’s ready to go when our heroes line up to eat. I organize getting food, desserts, drinks, ice, paper products, etc.” 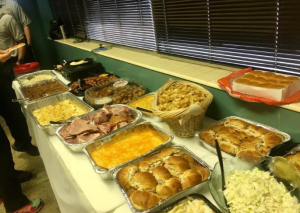 Beverly Cross organizes food for TPD and TFRD for the first three weekends of December each year.

It’s a gesture that is much appreciated by police officers and firefighters, said Police Chief Eric Rush, who was thankful for Cross’ effort.

“We are grateful that the Trussville community comes together each December and shows their support for public safety by providing us tons of delicious food during the month,” Rush said. “Each weekend is literally a feast! Mrs. Cross goes above and beyond in organizing this effort and ensures that we have just the right amounts of everything.”

There are challenges that come with such an undertaking. In addition to extensive planning and organizing, collecting enough food to feed the men and women of two large departments requires a lot of help.

“I try to get all the food I can every weekend,” Cross said. “My goal is to have enough that all the shifts can eat on it all weekend. I do a lot of begging and pleading on my Facebook page, on the What’s happening in Trussville Facebook page, and group messages to my friends.”

Cross said the help comes from a lot of sources to help pull off the event.

“I’ve been very lucky to have a few people that step up every year and help,” Cross said. “We’ve even been blessed by a few local restaurants that will bring in food. It takes a lot of food to feed that many people for the whole weekend.”

While a lot of people are already assisting, Cross said additional people who would like to help provide food would be welcome. The best way for someone to let her know that they would like to help would be via direct message on Facebook or sending her a text at 205-739-8612.

“I ask that everyone have their food at the police station around 10:45 to 11 a.m., ready to eat,” Cross said. “They don’t have to stay, they can just drop it off. I don’t even mind meeting people on Friday to get their food if they can’t get there on Saturday.”