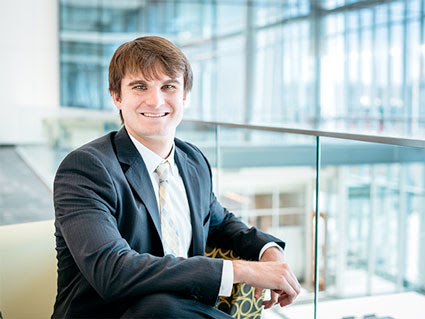 Rusty Duvall, a graduating senior, has achieved more than success throughout his life.

BIRMINGHAM — A two-time childhood cancer survivor, Rusty Duvall, will graduate from the University of Alabama at Birmingham with his bachelor’s degree in industrial distribution Saturday, Dec. 15, and start his dream job with the United Parcel Service in January.

When Duvall was 7 years old, physicians found a brain tumor that his parents knew would impact his life. At age 11, Duvall was diagnosed with a rare cancer in the bones of his eye socket.

“Sometimes I feel like my childhood was ripped from me in the blink of an eye,” said Duvall, a senior in the UAB Collat School of Business from St. Clair County, Alabama. “I spent a lot of time in the hospital. I didn’t get to grow up doing a lot of the things that I wanted to do. When I did get to go home, I was really weak and tired.”

Within the first four weeks of his brain tumor diagnosis, Duvall had four surgeries related to the brain tumor and a fifth surgery later that year. At one point, Duvall had fluid leaking from his brain and had to have emergency surgery to place a shunt in order to stop the drainage. 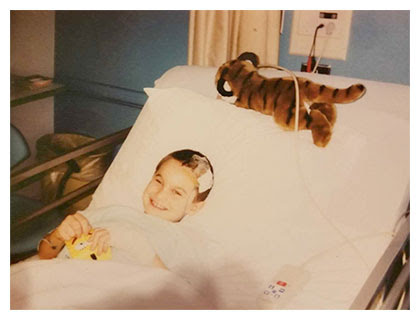 Duvall did not suffer any serious problems from brain surgery, but has felt the lifelong effects from the high dosage of chemotherapy and the surgeries that followed. Duvall has chronic periphial neuropathy, where the nerves in his right leg are dead, leaving him without muscle strength. He had several surgeries over the course of three and a half years to fix the nerve damage in his leg and eventually help him walk better in the future.

“I have a slight limp when I walk from the lack of muscle strength in my right leg,” Duvall said. “Unfortunately, they were never able to fully repair the nerves, but were able to prevent further damage. My legs and ankles are still very weak.”

The high dosage chemotherapy made Duvall very sick. He lost his hair and became extremely underweight. Because of the surgeries and chemotherapy, Duvall missed most of his second and third grade years in school. His teachers at Odenville Elementary School made sure he did not miss out on his education by working with his parents to complete assignments at home.

“School was always important to me, but it was hard to keep up with the work during this time,” Duvall said. “I would try my best to get up and go to school, but I was just physically too weak and sick to be there. Luckily, my teachers and my mom helped me through, and I passed both grades.”

Four years later, he was diagnosed with a rare bone cancer near his eye that was completely unrelated to the brain tumor. Duvall was devastated to learn that he had cancer again and became depressed. The physicians at Children’s of Alabama did a biopsy on the bone cancer to determine that it was easily treatable. Duvall underwent two surgeries to remove the cancer and another year of chemotherapy and steroids.

“My parents and I couldn’t believe that we had to go through this again,” Duvall said. “The treatments made me very sick and I was out of school for most of my sixth grade year, too.”

Duvall’s teachers worked with him to help him finish up the school year on time. On Aug. 18, 2008, he received his last chemotherapy treatment just in time to start seventh grade. He had 13 surgeries related to the two cancer diagnoses, with the last surgery taking place when he was a senior in high school.

“Cancer has changed me and made me a better person,” Duvall said. “Every day is a new day, and each day is a chance to get better and improve myself.”

In 2005, Duvall started attending Camp Smile-A-Mile, an organization that provides year-round programming that serves children and their families from diagnosis and throughout the years of treatment. Taylor Lawrence was his camp counselor from 2010-2014 and is a UAB Collat School of Business alumni. Lawrence and Duvall discussed his future and what he wanted to do. Lawrence would tell Duvall what college classes were like and the career opportunities that could follow upon graduation.

“I knew I wanted to go to UAB to pursue my degree and secure my future,” Duvall said. “But college was not looking like an option because of financial constraints. My parents worked hard to provide for me and my siblings, but college just seemed far-fetched.”

Upon graduation from St. Clair County High School in 2014, Duvall continued to pursue his dreams of higher education by applying for The Smith Scholarship Foundation, which provides scholarships to deserving Alabama students who have served their communities and have also faced adversity throughout their lives.

“Rusty is the type of person we should all want to be: kind, considerate and dedicated,” said Ahrian Dudley, executive director of the The Smith Scholarship Foundation. “He achieves through perseverance and grit. Securing his degree and job was not easy. Rusty learned to adapt both academically and professionally by maturely dealing with obstacles.  He combined his hard work and support systems in place at UAB, the Foundation and community to succeed. He has accomplished more than he dreamed possible when he first set foot on campus. We are so proud of him and the positive impact he has already made on so many people.”

During Duvall’s high school years, he had volunteered and served his community for more than 300 hours. His ability to overcome his challenges, alongside giving back to his community, led to his selection as a Smith Scholar. The scholarship and support programs enabled him to attend UAB and complete his degree.

In the fall of 2014, Duvall started UAB in pursuit of a nursing degree. He had been in and out of hospitals so much as a young child, and thought this was his calling. After speaking with his mentor, Lawrence, he learned about the UAB Collat School of Business’s Industrial Distribution program. During Duvall’s junior year, he switched his major, looking to find a career in the business industry.

Duvall received an internship with UPS before his junior year at UAB, where he learned the inner workings of industrial engineering at the Memphis distribution center. Duvall was invited back to intern with UPS before his senior year at the Birmingham distribution center. Upon graduation, Duvall will work at UPS full time as an industrial engineer supervisor.

“The experience I received at UPS really proved that I had taken the right career path,” Duvall said. “When they offered me a job, I couldn’t believe that I achieved my dreams amid all of the challenges I faced as a child.”

About UAB
Known for its innovative and interdisciplinary approach to education at both the graduate and undergraduate levels, the University of Alabama at Birmingham is an internationally renowned research university and academic medical center, as well as Alabama’s largest employer, with some 23,000 employees, and has an annual economic impact exceeding $7 billion on the state. The pillars of UAB’s mission include education, research, innovation and economic development, community engagement, and patient care. Learn more at www.uab.edu. UAB: Powered by will.