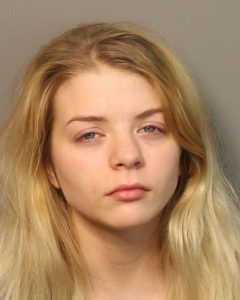 PINSON — A 19-year-old north Jefferson County woman has been charged with theft of property and making a false report after it was discovered that she made up a story about being robbed of her employer’s bank deposit, according to a statement from the Jefferson County Sheriff’s Office.

Just after 3:30 p.m. on Sunday, deputies responded to the report of a robbery of a person in a parking lot in the 6600 block of Alabama Highway 75 in Pinson. It was reported by 19-year-old Megan Michael that she had been robbed of the bank deposit for her employer, according to the statement from the Jefferson County Sheriff’s Office.

She reported that she had volunteered to drop off the deposit from Dollar General at the bank and as she was walking to her car she was approached by a man with a knife, the statement said.

The sheriff’s office said she further reported there was a second man waiting in a nearby car with a gun. She said the man with the knife demanded the deposit, that she struggled with him, but he got the money and fled in the car with the other man.

There were no witnesses. Deputies searched the area, but no suspect or vehicle matching the description was located, according to the statement.

On Monday, the store manager reported that Michael admitted that she had lied and had taken the money, the sheriff’s office said. She returned the money to the store.

Michael was taken into custody and questioned by detectives. She, again, admitted the robbery was a hoax so she could steal the money, according to the sheriff’s office.

She was taken to the Jefferson County Jail to await formal charges. On Tuesday, detectives obtained arrest warrants, formally charging her with second degree theft of property and false reporting to law enforcement. Bond was set at $2,800.