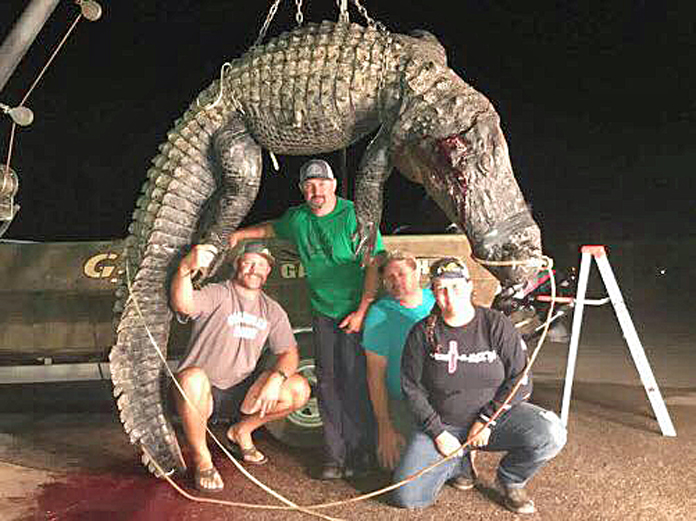 One of the largest alligators taken during the 2018 season was a 12-foot, 537-pounder taken by (from left) Tyler Dees, Thomas Dees, Mike Odom and Crystal Dees.

Odenville resident among other Alabama hunters to capture 144 alligators

MONTOGMERY — Odenville resident, Shannon Brasher, was one of six hunters who harvested a total of 144 alligators during the 2018 season, with the heaviest weighing in at 700 pounds. A total of 260 tags were issued in the four hunting zones.

Brasher caught seven alligators in the Lake Eufaula Zone, with the longest at 11 feet, 7 inches. 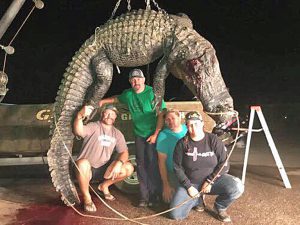 One of the largest alligators taken during the 2018 season was a 12-foot, 537-pounder taken by (from left) Tyler Dees, Thomas Dees, Mike Odom and Crystal Dees.

John Herthum of Montgomery took the 700-pound gator that measured 11 feet, 10 inches in the Southeast Zone, which includes private and public waters in Barbour, Coffee, Covington, Dale, Geneva, Henry, Houston and Russell counties. Herthum’s big gator was among 10 harvested in that zone, which issued 40 tags.

The Southwest Zone, which includes the Mobile-Tensaw Delta, checked in 96 alligators, including the heaviest at 603 pounds, caught by Josh Forbes of Mobile County. The longest gator was a 12-foot, 9-incher, taken by Donald White of Stockton. It weighed 588 pounds. Of the gators harvested in the Southwest Zone, which had 150 tags, 73 were males and 23 females.

“There was nothing abnormal about this past season,” said Chris Nix, Alligator Program Coordinator with the Alabama Wildlife and Freshwater Fisheries Division. “The alligators were a little smaller on average weight and length. There were more females harvested, which definitely had an effect on the average size.

“The weather was great this year. The number of tags filled just had to do with hunter selection. We still only had a few alligators harvested south of I-10. There are a lot of big alligators down there that are not being hunted.”

In the West Central Zone, where Mandy Stokes’ record alligator of 1,011.5 pounds and 15 feet long was taken in 2014, the 50 tag holders harvested 31 alligators. Of the 19 males and 12 females harvested, Donald Hogue of Alabaster harvested the largest at 12 feet, 3 inches and 538 pounds.