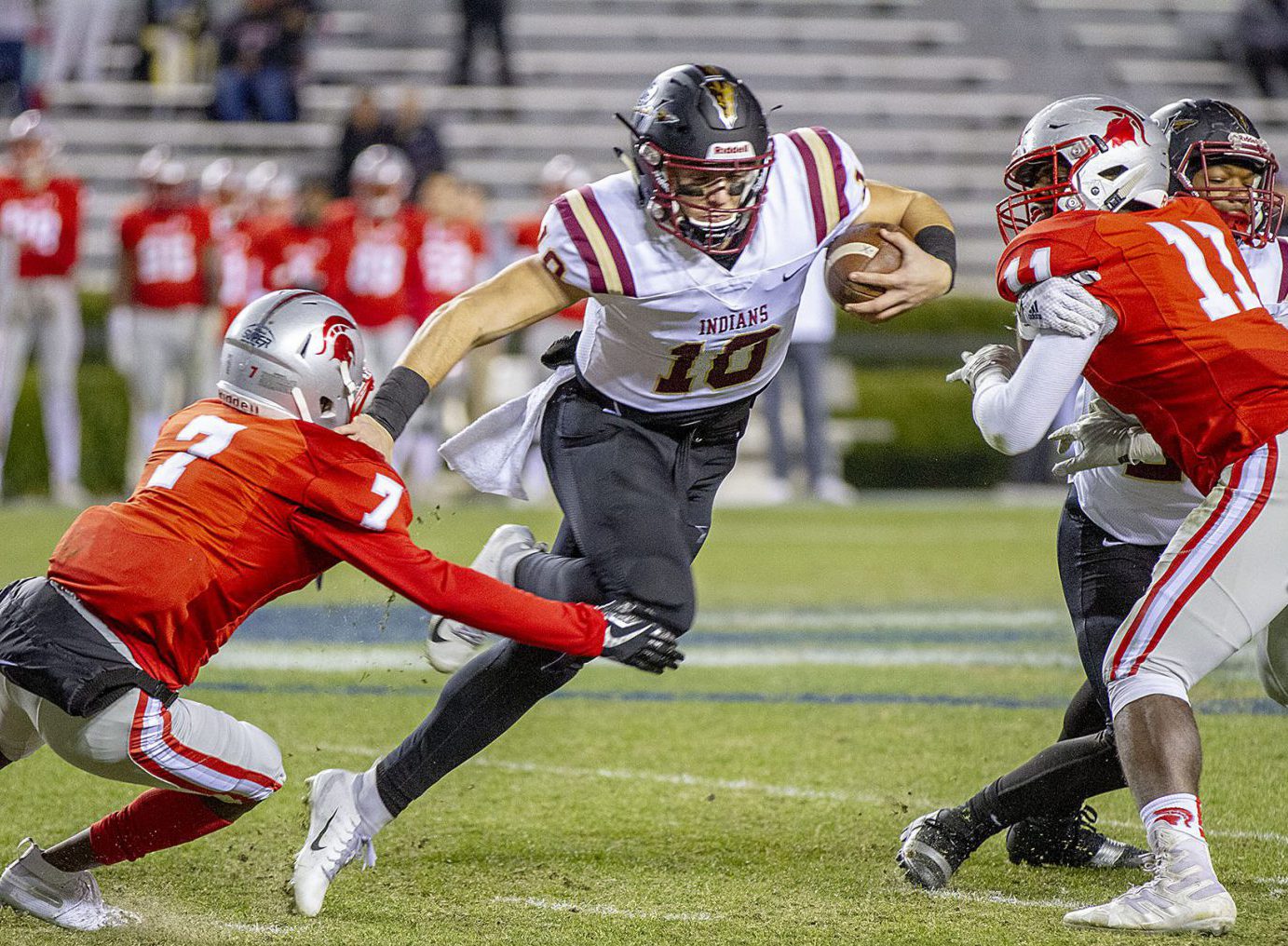 AUBURN — The Pinson Valley Indians finished their 2018 football season much like they finished their 2017 season, and that is having the title as 6A state champions after defeating Saraland 26-17 in Jordan-Hare Stadium in Auburn.

While most of the praise was on quarterback Bo Nix and the explosive offense, the Indian defense proved to be the dagger in the Saraland Spartans’ heart. Defensive end Joel Parker, who recorded five tackles and also added two sacks, knew that the defense would play their part even with the offensive woes at times.

“We just had to do what we’ve been doing, and that is reading our techniques and just staying disciplined and trusting the process,” he said.

The first quarter was adrenaline induced and physical as the Spartans tried to establish the run game early with their big offensive front. Saraland got on the board first after a 32-yard field goal from Cole Robitzsch at the 3:13 mark in the opening quarter.

Bo Nix and the Indian offense were not to be outdone as they went down the field and found six points by the way of a two-yard run from Nix. The extra point was blocked by the Sarland defense to make the score 6-3 with 40 seconds left in the first quarter.

After a defensive stop to open the second quarter for the Indians,  Nix found Geordan Pollard for an 83-yard touchdown pass on their first play of their first possession in the quarter.  The extra point was again blocked so the deficit remained single digits 12-3 in favor of Pinson Valley at the 10:23 mark of the second quarter.

The turnovers then began for both teams on their next possessions as the Spartans turned the ball over on a fumble that was recovered by Pinson Valley. Nix was then intercepted at the Saraland eight yard line as they were trying to gain some more momentum before the half. The score remained 12-3 at halftime.

The second half began the first half ended. The Indians received the second half kickoff and were unable to add any points to the board after Nix was intercepted once again by the Saraland defense.

The Spartans were able to capitalize on this turnover as running back Rayshawn McAlpine found the endzone on a three-yard touchdown run. After a successful extra point, the scoreboard read 12-10 in favor of the Indians at the 2:40 mark in the third quarter.

That score remained until Nix found Demarion Holloman in the back corner of the endzone alone for an easy two-yard touchdown pitch and catch with 11:21 left in the ballgame and, after a successful extra point, the scoreboard now read 19-10 in favor of the Indians.

Saraland answered right back after an 11-yard touchdown reception from quarterback Brett Nezat to Jay Williams and, after the extra point, the score was now 19-17 with 8:57 left in the game.

After the offense was forced to punt, the Indian defense put points on the board as Kendall Thorton intercepted Nezat and returned it 32 yards for a touchdown. With the extra point, the Indians regained a nine-point lead 26-17 with 5:07 left.

The Spartans were given one more possession, but the Indians defense held out and stopped the Spartans on a fourth down attempt to effectively end the game.

Coach Nix still gave praise to his players that were on the championship team last year.

“Those guys last year helped build this and make this possible, they helped get us where we are right now so I can’t forget about them,” he said.