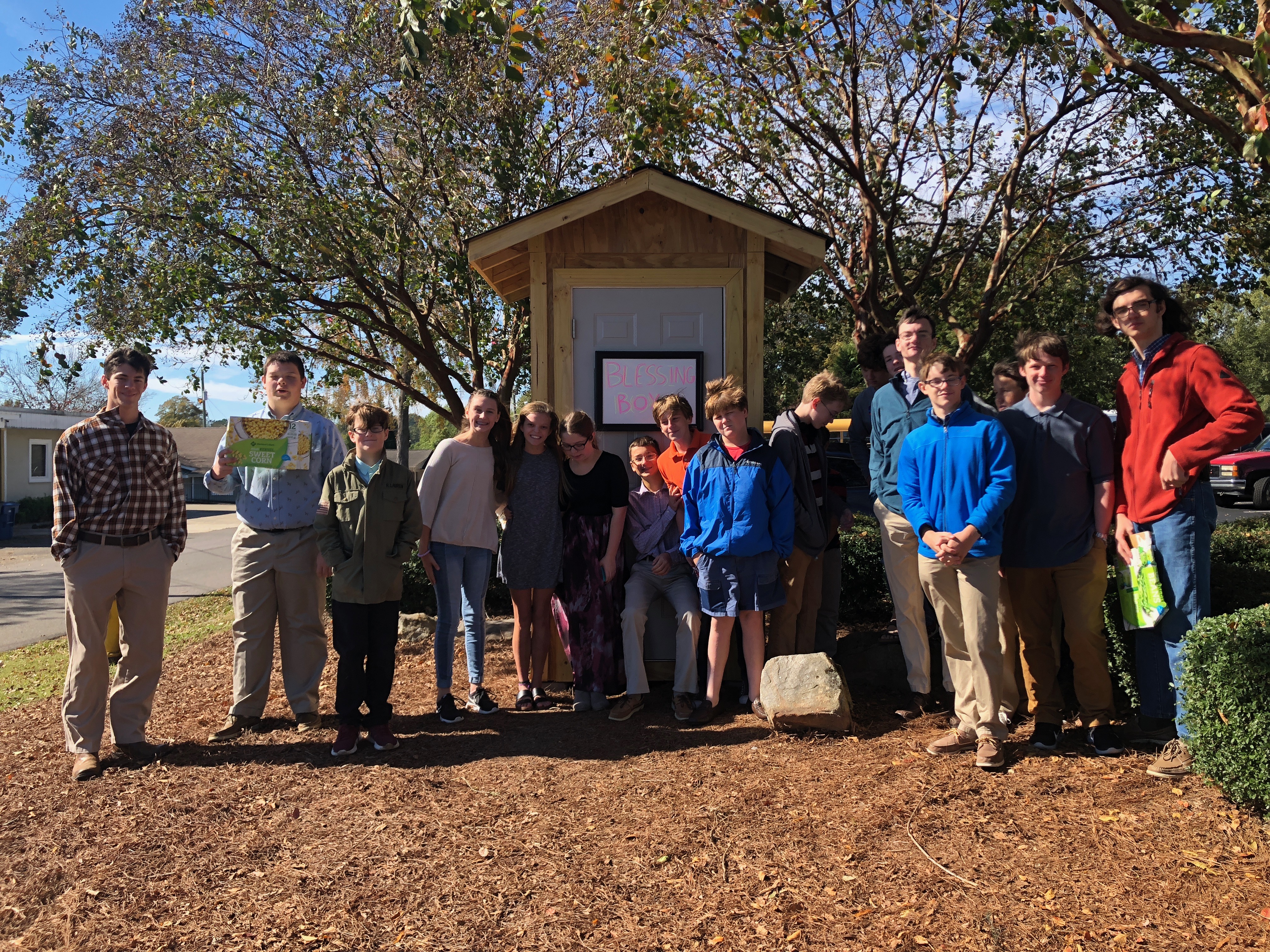 Members of FUMC's Student Ministry group stand in front of their Blessing Box, stocked with canned goods and other basics which are available 24/7.

TRUSSVILLE — First United Methodist’s student ministry recently completed the latest installment of their Feed the Hungry initiative. Bearing the moniker of Blessing Box, the freestanding structure on Linden Street is unlocked 24/7 to offer canned goods and winter accessories to anyone in need.

“We were brainstorming at church one night, basically about how we could help make the world a better place, and we decided to start by feeding people in the community,” June Mobley said. An eighth grader at HTMS, Mobley is among those credited by Student Director Drake Roberts for the program’s continued success.

“The kids really have done all of the work,” Roberts said. “They come up with the ideas, get the ball rolling and spread the word to get people involved. It is truly a youth-driven initiative.”

HTHS sophomore Thomas Schultz attends FUMCT with his family and was also seeking a project to meet the requirements to obtain his Eagle Scout status through Troop 216.

“They already had the idea about the Blessing Box, but needed a way to protect the items,” Schultz said. “So Drake approached me about building a shelter. I developed a design based upon the requirements that the church provided. Once we set a date to build the shelter, I was very surprised by the amount of people that have supported it.”

Since launching the Feed the Hungry initiative over the summer, the students have aided food-insecure individuals by collecting snack items for college kids, delivering an SUV filled with food items to T.E.A.M. (Trussville Ecumenical Assistive Ministry), distributing over 50 filled grocery bags and offering a hot meal.

Mobley shared that experiencing what she believes to be God’s provision has enriched her faith throughout the course of the Feed the Hungry projects.

“The first time that we did the drive-up grocery bags, we made 50 bags,” she said. “We were getting close to running out of bags and still had time left when people to come. We found some canned goods, moved some things around and were able to stretch it to 55 bags. We gave out the last one right when the event time ended. I know that God was with us that night to help everything stretch to that last bag at 7 p.m.”

“These projects are important because we’re not just sharing food, but also sharing our faith by showing people kindness,” said HTMS eighth grader Kate Jordan. “I talked with a family during the dinner that has a daughter who is 15 years old. They drove from another town, maybe because they were not comfortable asking for help near home. It just made me wonder how many people at my school are going through tough times like that.”

The one-on-one interactions have also made an impact on Mobley, who said, “The day we passed out groceries, there was a little boy. When he looked into the grocery bag and saw goldfish crackers, his face lit up. We always have goldfish or different snacks at home and I’d never really thought about it before. But seeing people get so excited about things that we take for granted has made a big impact on me.”

Schultz echoed these sentiments when he said, “Being involved in the project has made me more aware of what’s behind people just being able to afford to live in Trussville.”

The youth straighten and restock the Blessing Box contents on Sunday mornings and Wednesday evenings. With the drop in temperature, soups such as chili and stew have been quick to go.

“We also want to offer more socks, toboggans, and gloves,” Jordan said. “We don’t keep perishable items or things in cardboard boxes because mice can get to them. We also don’t offer coats in the Blessing Box, but we can take them to T.E.A.M. if we receive any as a donation.”

Donations should not be placed directly into the Blessing Box, but delivered to the First United Methodist Church office Mondays through Thursdays between the hours of 8 a.m. and 4 p.m.  The youth are currently requesting canned vegetables, soups such as stews and chili, and winter accessories such as socks, hats and gloves.

“It’s been very inspiring to watch the kids spread their wings, take their energies and look for a call to answer,” Roberts said.