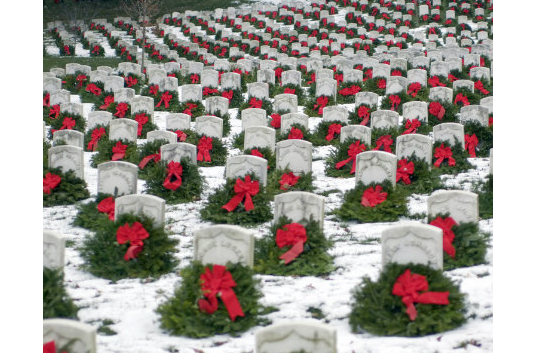 TRUSSVILLE – The Wreaths Across America ceremony will be held at Trussville’s Jefferson Memoria Gardens on Saturday at 11 a.m.

See related: Wreaths across America to honor veterans, including five local heroes that made the ultimate sacrifice

The mission of the Wreaths project is to ensure that those who gave their all will never be forgotten.

“It is a national project,” said veteran and president of the local Fleet Reserve Association, Wayne Odell. “It started at Arlington National Cemetery. The goal is to put a wreath on every veteran’s grave throughout the country. We here in Trussville are very fortunate to have all active duty recruiters to lay the wreaths for each branch of service. We have the Alabama Artillery to fire the cannon.  This year we’ve added bagpipes.  We will have someone come and play taps also.”

Jefferson Memorial Gardens in Trussville is the resting place for five young men from the local community who made that ultimate sacrifice.

According to Odell, five of the veterans being honored for their sacrifice in recent conflicts are :

Stegall was a highly decorated war veteran and passed on due to complications of the H1N1 virus.

“Kelly Stevin Prewitt, killed in action April 16, 2003.  A student of Cathedral of the Cross in Center Point. He was awarded the Purple Heart. His age was 24.

“Jonathon Millican was killed in action on Jan. 20, 2007.  He attended Locus Fork High School.  He was awarded the Silver Star and Purple Heart.  He was 20 years old.”