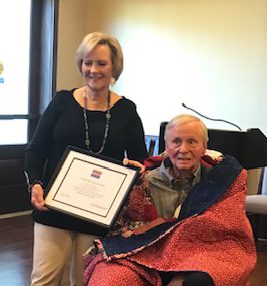 Local veteran honored with Quilt of Valor by members of DAR

TRUSSVILLE — Members of the Josiah Brunson Daughters of the American Revolution presented a Quilt of Valor and Certificate of Appreciation to U.S. Army veteran Clifford Odom on Sunday, Dec. 2, at the Pell City Veterans Home.

Odom served the United States Army during the Korean conflict, then spent the next 32 years in the service of the Army National Guard, retiring with the title of Chief Warrant Officer.  As a civilian, Odom focused on real estate development in western Jefferson County, Center Point and Trussville.  He was also a real estate appraiser. 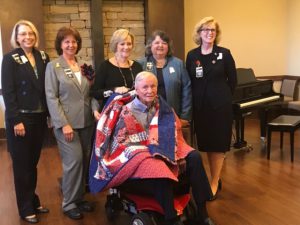 The Quilt of Valor was prepared by Chris Long and its draping around Odom’s shoulders represented DAR’s honoring of his sacrifice and service.

The Daughters of the American Revolution is a lineage-based, service organization, open to any woman 18 years of age or older, who can prove direct lineage to someone who contributed to the cause of American freedom, whether through civil or military action.  Our goals are to support historical preservation, promote education and encourage patriotism.