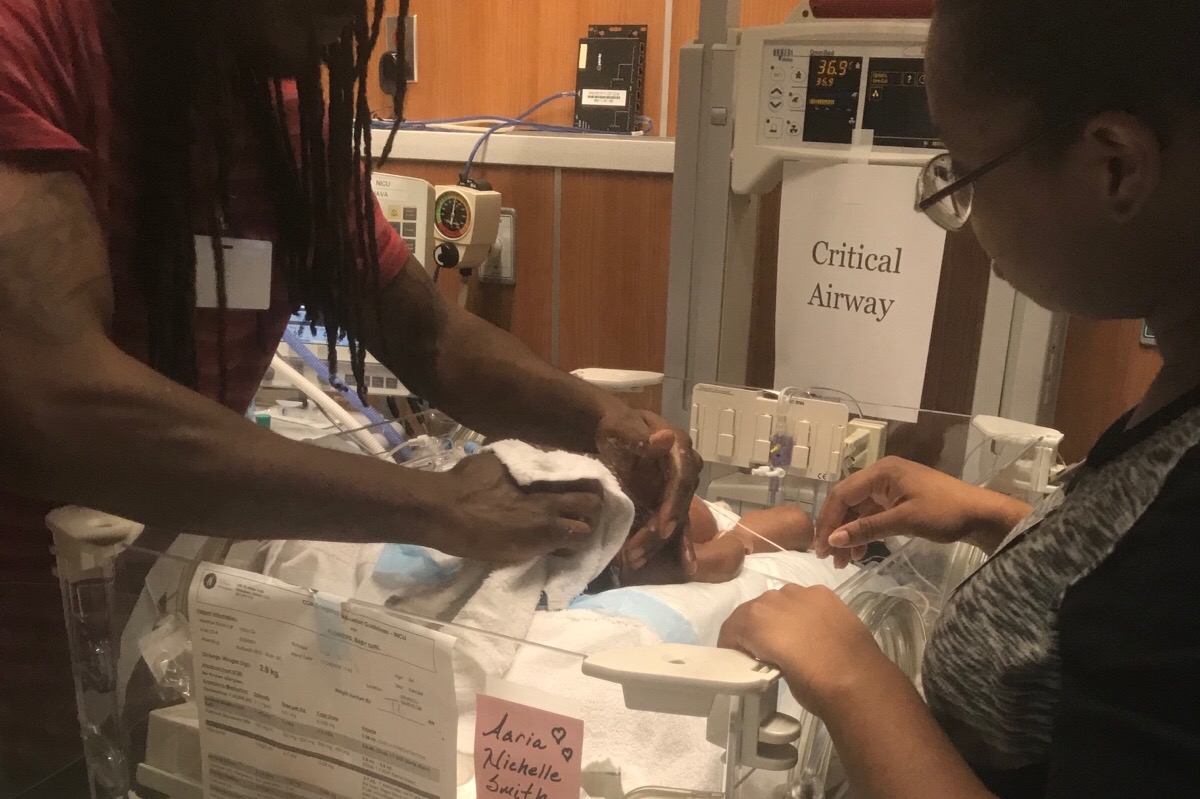 Clay community rallies to support Clay-Chalkville’s Voice of the Cougars, Freddie Flowers, and family through loss of grandchild

Most people living in the city of Clay have heard Freddie Flowers Jr., Clay-Chalkville’s Voice of the Cougars, over the loudspeakers on Friday nights during football season, but not as many may be aware of the tragedy that struck his family this holiday season.

“Immediately following the birth, they realized something was wrong because they took the baby out of the room,” Flowers said. “(Vivyanne) didn’t get to hold the baby.”

Baby Aaria was rushed to the Neonatal Intensive Care Unit at UAB Hospital, where doctors discovered she had Lissencephaly, also known as ‘smooth brain,’ a rare genetic disorder that affects the brain.

“Best case scenario, the life expectancy of a child with that disorder is 10 years,” La-Tunya said. “(Vivyanne) had a project on this particular genetic disorder in high school her senior year. So when she heard the physicians talking about it amongst themselves, she immediately knew what it was. When she called me, she made me remember her homework assignment, and when she said ‘smooth brain,’ everything started to kick in and all of the different scenarios for that disorder started kicking in. I was hoping for the best case, but the doctor said it was the more severe end.”

The Flowers’ said that doctors told them Aaria’s brain’s ability to learn would not exceed that of a six-month-old and they did not expect her to live past 48 hours.

“As far as the doctors were concerned, they were giving it 48 hours,” La-Tunya said. “Every day was 48 hours, and we were just hoping for 48 more hours. She lived for 13 days.”

When Aaria was a week old, doctors discovered that her lungs were also underdeveloped, Flowers said. One lung was the size of her heart and the other was smaller than her heart.

“She was on a respirator, and they had to put her on an oscillating ventilation machine, which is almost like an iron lung, because she just could not breathe on her own,” he said. “There were times when she would try, but she was unsuccessful, and then they realized that this wasn’t going to work.”

“She was a fighter, I can tell you that,” La-Tunya said. “And a miracle, because for her to live that long and try to breathe on her own. But the doctor said in the end, on that second week, that Monday he came to us and told us that she would never be able to breathe on her own because of the size of her lungs. They were just truly underdeveloped.”

After 13 days of hoping and praying, Aaria’s parents, DeAndre and Vivyanne Smith, had to make the hardest decision any parent could make, to take their daughter off life support and place her in the hands of God. Aaria passed away on Dec. 7, 2018. 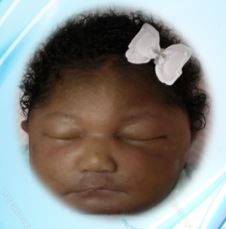 As if everything the Smiths were going through wasn’t already hard enough, while they should have been able to take time to solely focus on their newborn daughter, DeAndre and Vivyanne were facing several other challenges simultaneously.

Early on in the pregnancy, DeAndre lost his job and had to spend most of the pregnancy working part-time jobs to support his family, which also resulted in the loss of their second vehicle, leaving them with one car.

“They had struggles, like a lot of young couples do, and they weren’t able to hold on to one car, and the other one needed some work done to it, but they were not able to afford it,” Flowers said. “That always creates this problem and it’s not uncommon for that to happen.”

During this time, DeAndre was – and still is – going to a journeyman electrician school to learn electrical work, which opened the door for him to get a full-time job with Trinity Contractors, just days before Aaria’s birth.

“(Trinity Contractors) have been generous throughout the whole process in trying to accommodate DeAndre,” Flowers said.

Right after the baby was born, however, the transmission went out on the Smith’s only vehicle.

“(DeAndre) went to work and on the way home, it just died, right after the baby was born,” Flowers said. “Everything kind of converged all at once. It’s a tough situation for them, it truly is.”

While the Smiths live in Tarrant, DeAndre works in Alabaster and goes to school in Birmingham off Oporto-Madrid Boulevard, so he has been having to depend on rides from family members to get to and from work and school.

“So we spent a lot of time staying overnight in the NICU,” Flowers said. “That’s how we were so involved. You couldn’t really help it, because given their situation: dad’s trying to start a new job and get a career going, he’s still in apprenticeship school; Vivyanne…the avalanche, like drinking from a fire hydrant, because of everything going on with the baby and then the post-partum on top of that. It was just one of those situations to where, OK, we have to take the reigns. God said, ‘Hey, you’re here. You do this. You have been prepared for this.’”

The Flowers both felt that God had prepared them a long time ago to walk with their daughter and son-in-law through this hardship. Early in their marriage, the Flowers lost their first babies, twins, at 23 weeks gestation. They were living in Germany at the time, where they met when they were both stationed there in the military.

“It truly is a testimony to say that, in our family, this is not the first time,” La-Tunya said. “Fred and I experienced the same thing at the beginning of our marriage with our twins, and it was right at Christmas season. The kids grew up hearing our testimony, because (the twins) were my testimony to my salvation. Leading up to me having them is where I found Jesus. So when Fred said we were prepared, we were prepared. Every situation is different, but it was as if the foundation was laid so that we had firm ground. Vivyanne, throughout it all, said, ‘Mom, I had the right parents to see me through this.’ I’m just so thankful that she held on to those memories and she used that as a foundation to stand on and to hold on to so that she, too, could get through this.”

Several members of the Clay community, including Clay City Council members, have rallied around the Smiths and the Flowers during this hard time, offering prayers and looking for ways to help them.

“We, here in Clay, we have heard from everyone from the mayor on down, and I guess everybody is wondering what to do, how to help,” Flowers said.

“In it all, we’re firm believers that God didn’t get La-Tunya and I where we are by accident,” Flowers said. “There have been folks who have tried to do what they can. There are folks at (Clay-Chalkville) high school that have rallied around us, here in the community. They just don’t know what to do. So with Michelle setting up the GoFundMe page, we were surprised. We woke up one morning and it was there. Michelle is like a daughter to us.”

Not knowing how much to ask for on GoFundMe, Vivyanne called her mom for advice. Ultimately, not wanting to ask for too much, Vivyanne decided to tell her friend to set the goal at $1,000. As of Dec. 21, $380 of the $1,000 goal had been reached.

“She only asked for $1,000 to help cover the funeral expenses,” La-Tunya said. “Her medical expenses (have not yet) come in and I said, ‘You’re going to need more than $1,000.’ And she said, ‘Mom, we’re just going to do this because I can’t deal with anything else.’ So I just stopped when she said that, backed up, and I said the Lord will provide and we’ll just go with that. Maybe more will come in if it does, and if it doesn’t, we’ll just pay on it $20 at a time, because that’s the best that we can do right now.”

“It’s just one of those situations where, they’re great kids and they’re really needing some help,” Flowers added. “They’re still dealing with it.”

Aaria’s memorial service was held on Saturday, Dec. 15. At the Dec. 11 Clay City Council meeting, Councilor Don Baker asked the council to keep the Flowers and Smith families in their prayers.

“Y’all know Freddie Flowers, the Voice of the Cougars,” Baker said. “They’ve had a really rough go with one of their grandchildren. I just want to note everything that Freddie does for the kids (in the community). He does it selflessly and serves. In the wake of their grandbaby, I want to keep the Flowers and the Smith family in our thoughts and prayers.”

The Flowers were both surprised and touched that the city council reached out to support them.

“We understand that God is the head of our lives, and living in a community that is God-centered is where we wanted to be,” Flowers said. “In times like this, it has shown. I would’ve never expected a call from Don, where he asked could the city council pray for us. Here I am, I see myself as just ‘Joe Citizen,’ because there are so many others that live in Clay…and there’s no telling what they’re going through. God speaks to me when I hear things like that.”

For anyone wanting to help the Smiths through this hardship, Flowers said that “an immediate need, at the top of the list, would be a car. We know that there are folks out there working on clothes for the kids, that we’re aware of. If we had $5,000 right now, they’d have a car, they’d have everything, it’d be done. But we just can’t do it right now. Life brings its lumps and God has a purpose in all of it, and we know that they’re going to be stronger for it.”

Donations can be made for the Smiths at https://www.gofundme.com/aaria-nichelle-smith-memorial.