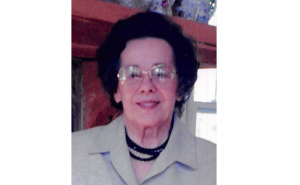 She was born to the late Lewis and Mary Vaughn. Davis was a lifelong member of Huffman United Methodist Church and Daughters of the American Revolution (DAR). She was a Sunday school teacher for preschoolers and for Mary Martha Ladies Sunday School Class for over 20 years. Wherever she went laughter always accompanied her. She took care of her mother and her father during their late years.

Davis was an avid writer. She and cousin Lucy developed a Family Newsletter (News in a Nutshell) to family in several states. She was a genealogy researcher before the days of computers and assisted in writing a book about the Hansford Family. Friends and family called her Liz and she penned the signature Lovingly, Liz as she remembered a very large family on every occasion-birthdays, anniversaries, and holidays. She always sought out those who needed help and served them relentlessly.

Davis is preceded in death by her husband of 61 years, H. Milton Davis. She is survived by two daughters, Beverly Lavender (John) of McCalla, and Rebecca Reed (David) of Somerville; four grandchildren, Amy Rodgers (Joel) and Daniel Lavender of Birmingham, Rachel Evans (Daniel) of Meridianville, and Ariel Reed of Catalina Island, CA; three great-grandchildren, Lily Kate Rodgers and Eli and Carson Evans; one brother, John E. Vaughn (Margaret) of Huntsville, AL; special niece, Carol Waller (Jim) of Locust Fork; dearest cousin, Lucy Rimler of Watkinsville, GA; and a special thank you to Sarah Thrasher, caregiver who loved her like a mother. The family would also like to thank Ascension At Home (St. Vincent’s Hospice) caregivers for their care of Davis.

In lieu of flowers, the family requests no cemetery flowers, but make memorials to the Alzheimer’s Foundation of America at 322 Eighth Avenue, 7th floor, New York, NY 10001.  The foundation may also be contacted at www.alzfdn.org or (866) 232-8484.