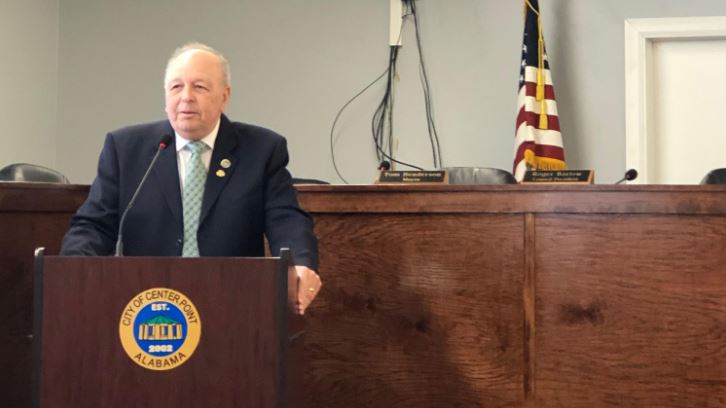 CENTER POINT – Mayor Tom Henderson of Center Point delivered the annual State of the City address to the Center Point Area Chamber of Commerce on Wednesday. 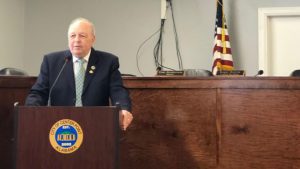 “I appreciate being able to be here to give this State of the City address to you again this year,” said Henderson.  “I don’t know how many years it’s been that we’ve been doing this, but at least 10 or 12, somewhere in that area. I always enjoy talking about Center Point. As most of you know, it is near and dear to my heart and I got kinda wrestled into being the mayor 16 and a half years ago, but it has been a labor of love for the years and continues to be.”

Henderson highlighted the purchase of Hilldale Baptist Church by the city, and all the work that has taken place at that property.  That work includes transforming the property into a community center and renovation of the gymnasium, which will allow for the play of badminton and pickleball.

Henderson also noted that architectural work is nearing completion for the new Center Point Library.  It is hoped that construction on the project will commence in the spring or early summer. The library committee is currently searching for a librarian to hire that will be able to work for the new library while the building is under construction and offer some guidance in the building process.  If all goes according to plan, the new Center Point Library should open sometime in early 2020.

The mayor also spoke of the city taking over ownership of the Civitan Park in Center Point.  The city has recently taken ownership and responsibility for the park.

“We intend to continue to have the boy scouts and the Civitan Club there doing the same thing, operating the same way that they have been doing for as long as they want to be there,” said Henderson. “Our goal is to maintain that park there as a place where people in the city can come and enjoy themselves and have kids play in the playground, just as it has been for years.”

Henderson mentioned progress that is being made on the splash pad.  It is believed that it will be open and available by the spring.

Geological work is being performed at the senior center.  It is thought that the facility can be enlarged to include a space that can be used as an exercise room, a meeting room, and will be able to serve as a storm shelter.

The mayor said that the city is nearly ready to embark on a project to build a storm shelter on the property behind the fire district’s Station One.  It is unknown how long the process will take, but the shelter is prefabricated and it is believed that the process can be completed quickly once installation has begun.

Henderson also addressed the issue of crime in Center Point.

“As you know the city has been working with the office of the justice department through the Department of Justice to study crime in Center Point,” said Henderson. “We’ve been working at that for about a year or a little more.  It has reached the point now that the Department of Justice is setting up classes for our deputies and other law enforcement people here in the city, and possibly on this end of Jefferson County, to train more in community policing and also to work with the school resource officers in order to make them more efficient in knowing what their jobs are in the schools.  At this time, we have a school recourse officer in each one of the schools, which is good.”

“Mr. Buddy Aydellete, as I told you, is our new economic development specialist and is working with RPC on the incubator,” said Henderson. “And he’s also working with retail and other people to continue to bring business into Center Point and to retain the businesses that are here.

“The retention of businesses is just as important, or more important, than bringing in new businesses, because you just don’t want to lose those good businesses you have.”

“We had a pretty good financial year and expect a better one this year,” said Henderson.

Henderson closed out his remarks with comments on Center Point’s future.

“I thank you for your attention,” he said. “I appreciate you coming, and Center Point is on the move and we’d like for you to come along for the ride as we move forward with the positive things that are happening in our city.”