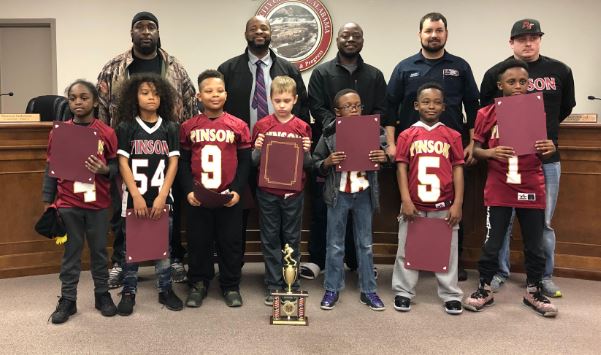 PINSON — The Pinson 8U Football team was honored by the Pinson City Council on Thursday. 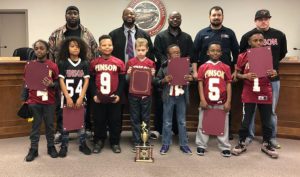 Mayor Hoyt Sanders presented a resolution before the council to recognize the team for an outstanding season in which they placed second overall with the United Youth Football of Alabama.

“Whereas extracurricular activities such as sports allow young people the opportunity to learn the valuable skills of teamwork and cooperation while developing their athletic talent,” Sanders said, “whereas to become a winner in a given sport team members much excel in such skills and abilities, commit many hours to practice and devote effort and self-discipline, and whereas the 2018 Pinson Youth Sports League 8U Football team had an exceptional season placing second overall in the United Youth Football of Alabama, and whereas this team represented Pinson youth sports, the city of Pinson and all of Jefferson County with superior skills and a sportsman like manner, now be it resolved that the mayor and the council desire to recognize the coaches and team members for their outstanding work and dedication to the 2018 season.”

The council passed the resolution unanimously.

After the resolution was adopted, the name of each team member was read aloud and Sanders presented a certificate to each player that was present.

“We fought, we changed, we dug in deep,” Evans said.

Evans summed up everybody’s feelings about Pinson’s 8U Football team.

“This is a great team,” Evans said. “We’re looking forward for the future of these young guys right here because we’re going to be something special.”