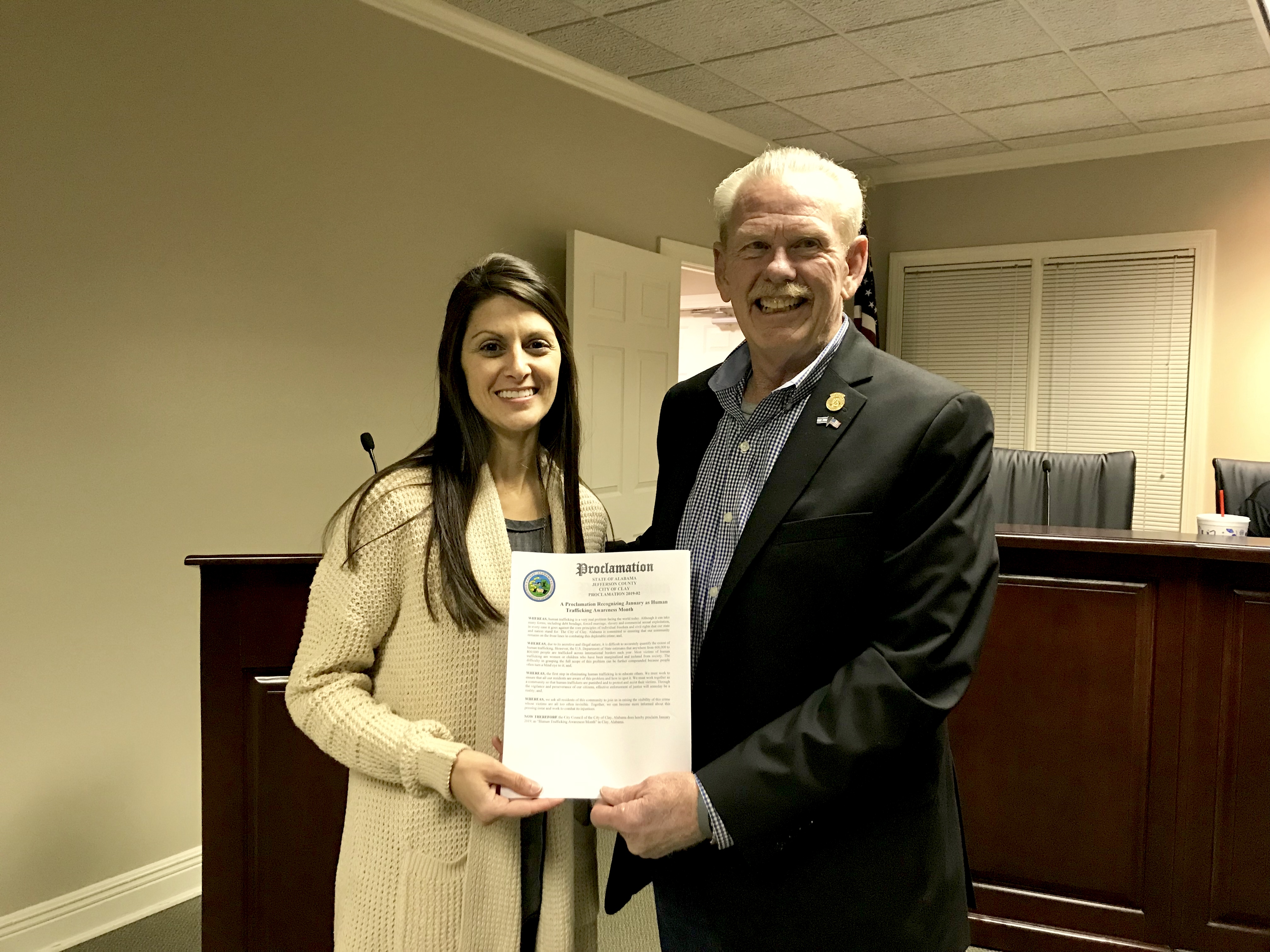 “Mike Hale and his wife, Diana, have been residents of the City of Clay since 1990, and the City Council of the City of Clay is proud to recognize the achievements of the citizens of the community,” the proclamation said. “Throughout his tenure as Jefferson County Sheriff Mike Hale created the Sheriff’s Office School Resource Officer Division, Contract Deputy Program, Metro Area Crime Center, Identity Theft Unit, aggressively fought to strengthen sex offender laws, and committed personnel to a Joint Anti-Terrorism Task Force…

According to the proclamation, Hale retires from the Jefferson County Sheriff’s Office this month. 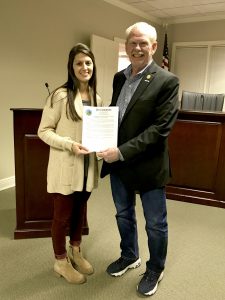 “The City of Clay, Alabama is committed to ensuring that our community remains on the front lines in combating this deplorable crime…,” the proclamation said. “The first step in eliminating human trafficking is to educate others. We must work to ensure that all our residents are aware of this problem and how to spot it. We must work together as a community so that human traffickers are punished and to protect and assist their victims.”

During Mayor and Council Comments, Councilor Don Baker made a statement regarding the recently fallen Birmingham Police Sgt. Wyt Carter.

“I don’t think we’ve had a chance to meet since the police officer in Birmingham was shot,” Baker said.  “My thoughts and prayers and condolences, and I’m sure as the council goes, is for the city of Birmingham Police Department and the family, and all those that he touched.”

Additionally, Councilor Dennis Locke wanted to remind citizens that the John A. Williamson Boys & Girls Club is a “great resource” in Clay.

“They do a tremendous job over there,” Locke said. “I had the opportunity to sit with some of the students who were running for the Youth of the Year Award and I was totally impressed with the quality of those students and the maturity. I asked one of the candidates, ‘So, what does the Boys & Girls Club mean to you?’ And he said, ‘It means everything to me.’ There was no hesitation. There was no pause whatsoever.”

Locke added that the Boys & Girls Club can always benefit from volunteers and donations, and he invited members of the community to get involved.

In other city news, the council unanimously passed Resolution 2019-02, “A Resolution to Condemn and Authorize Demolition of Unsafe Buildings and/or Structures” at 7153 Cabin Lane, Pinson, AL 35126.

According to the resolution, “the Building Inspector has investigated the property…and have determined that said building is dangerous, unsanitary, and unsafe as described in Ordinance 2005-57, and recommends demolition of said structure.”

Prior to voting on the resolution, the council held a public hearing at which no one spoke.

The resolution added that the city plans to open bids for the demolition on Feb. 26, 2019.

“You’ve got three of us here from that street, and we all would be just tickled pink to see the thing go,” citizen Harvey Watwood said during Public Comments. “So we’ll just hope…the sooner the better, as far as I’m concerned.”

The next Clay City Council meeting will be held on Tuesday, Feb. 12 at 6:30 p.m., immediately following a pre-council meeting at 6 p.m.