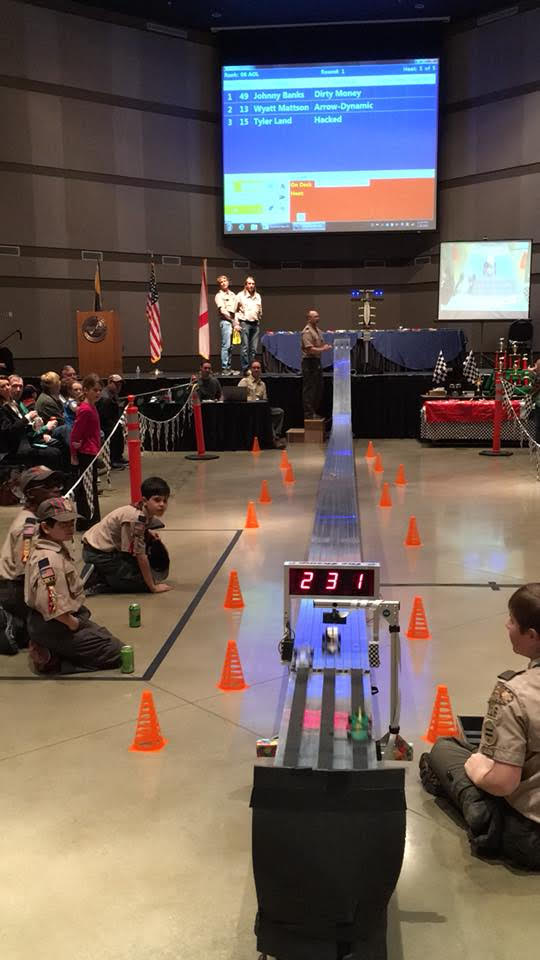 And they’re off! Pinewood Derby this Saturday at the Trussville Civic Center

TRUSSVILLE — Saturday is race day at the Trussville Civic Center and eager Pinewood Derby enthusiasts will get the chance to show off their miniature hot rods starting at 11 a.m. 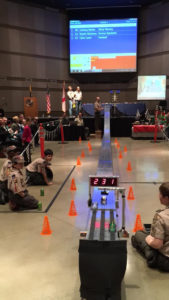 This event is the culmination of many weeks of planning and effort that began when members of Cub Scout Troop #316 were given Pinewood Derby car kits, at the end of the Trussville Christmas Parade, by Santa Clause, himself.

In the intervening weeks, scouts have spent much of their free time turning blocks of wood into fierce machines capable of incredible scale speeds.  They were not alone in their efforts.  Many volunteers donated their tools, time, expertise and weekends to assist the scouts in their efforts.

One of those volunteers was Rob Letts, the Cubmaster for Pack #216 and a person with a great passion for all things scouting related.  As Letts explained, there was a series of workshops, set over three weekends, where kids were assisted with the construction of their vehicles.

“(It was) an opportunity for those that don’t have power tools, or need some guidance on what to do,” Letts said. “Maybe it’s their first Pinewood Derby and they don’t know what to do, so it’s a great opportunity for them to come out, get some fellowship, let the kids kinda get together and have some fun and work on bringing their idea to life for their cars.”

On the Friday evening before race day, a registration will be held from 6 p.m. to 8 p.m. at the Trussville Civic Center.  Cars will be weighed and checked against the height, width and other limitations, and it will be made sure that the vehicles can clear the track and that the wheel base is where it should be.  Any vehicles found to be in variance can be taken to a “pit stop” area where adjustments can be made and volunteers will be standing by to provide help in getting the cars up to spec.

Once the cars have been registered, they will be kept safe until the race.

“We’ll have a special rack; all the cars will get placed,” Letts said.  “Once the cars are there, nobody touches the cars until race day.”

Late registration will be held on Saturday from 9 a.m. to 10 a.m. at the Trussville Civic Center.

Saturday morning at 9 a.m. is also when the race officials will show up. It is all volunteers that are in charge.  They will do a final check on all the software and do some test runs on the track to make sure that everything is in proper working order, including a camera to provide photo finishes.  That is when the fun begins.

“Everybody gets assigned a number,” Letts said. “It gives us a chance to the get the scout’s name and what they want to call the car for the day, which makes it a lot of fun for us as announcers running the races.

Each group will be called to the track when it is their time to participate.  The group will occupy an area near the track so racers will be able to get a very good view of the action.  The public — and all are welcome to the event — will also be treated to a prime view.

“We’ve got seats flanking both sides so all their family members, all their friends can cheer them on, and their siblings, as well,” Letts said. “So, it’s a lot of fun.”

At the conclusion of group competition, the results will be tallied by computer software. A new race roster will be generated with all the first-place winners, from their respective groups, facing off against each other.  In this manner, the scouting pack will be able to produce an overall first, second and third place winner.

Winning, however, is only part of the fun.

“Every child will receive a custom Pack #216 derby patch for the year, and our theme this year is grease monkeys,” Letts said. “Those (are) official BSA patches and they get approved by BSA National.  It is really cool to know that as a unit level, we can have BSA approved patches made and created.  Each child will get a certificate, as well.”

Winning the race is also not the only way to secure recognition at the Pinewood Derby.  Special judges will select cars from a number of categories for recognition.  Categories such as “most patriotic” and “most likely to win Motor Trend’s Car of the Year” can also net a young racer a special award.  Judges will also grant an award and a trophy for “Most Original Car.”