Confidence in snow on Tuesday is growing

TRUSSVILLE — Two previous snow predictions this winter have come through with flying colors. At least, the “little to no accumulation” part of the predictions proved accurate. If you were standing outside at exactly the right time — with a magnifying glass in hand — you may have even seen the predicted white stuff.

Such is the nature of predicting snow in the deep South where precipitation and falling temperatures must arrive in perfect timing while the stars align and the majority of the populations holds their tongue in just the right way. 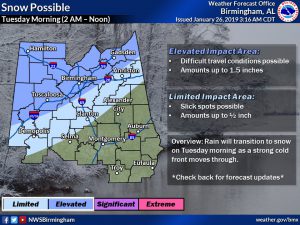 Be that as it may, the National Weather Service in Birmingham continues to show forecast models that indicate a 70 percent chance of snow on Tuesday. As the day draws closer, the confidence increases.

Locally, snow accumulation could range from half an inch to 1.5 inches.

The snow could begin as early as 2 a.m. for the northwestern portion of Alabama. The best chances of snow for the local area is between 9 a.m. and noon. Before 9 a.m., there will likely be a mix of rain and snow.

The high temperature on Tuesday is expected to be 36, dropping to a low of 18.

On Wednesday, temperatures will climb back to the low 40s.

Stay tuned. There is a 100 percent chance that this will continue to be an interesting story to follow.