TRUSSVILLE — As is so often the case in the deep South, the prediction of a winter wonderland of 2 to 3 inches of snow never materialized.

At about 3 a.m., the National Weather Service in Birmingham pulled back on the area included in the winter storm warning that was issued two days ago. The new area included Jefferson County and counties to the southwest, as opposed to the earlier warning that included most of central and north Alabama.

By 5 a.m., the winter storm warning was canceled completely by NWS and replaced with a winter weather advisory as temperatures remained above freezing.

The prediction of 2 to 3 inches of snow accumulations was revised to “Rain changing to snow for 2 to 3 hours. Could be locally heavy for a brief period and result in accumulations up to one inch on mainly grass and elevated surfaces.”

There are still concerns that there could be some freezing on roadways if temperatures continue to drop, but highs on Tuesday are expected to be in the mid-30s. As of 5 a.m., the snow was immediately melting on roadways.

Overnight Tuesday and early Wednesday, temperatures are expected to drop well below freezing and any water remaining on roadways will turn to ice. 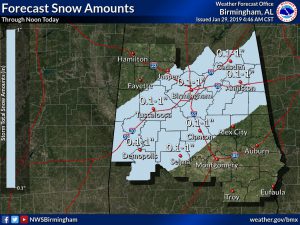 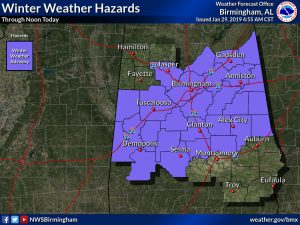 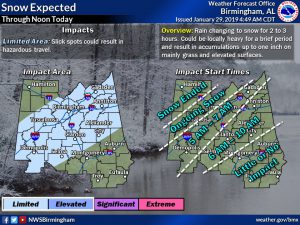