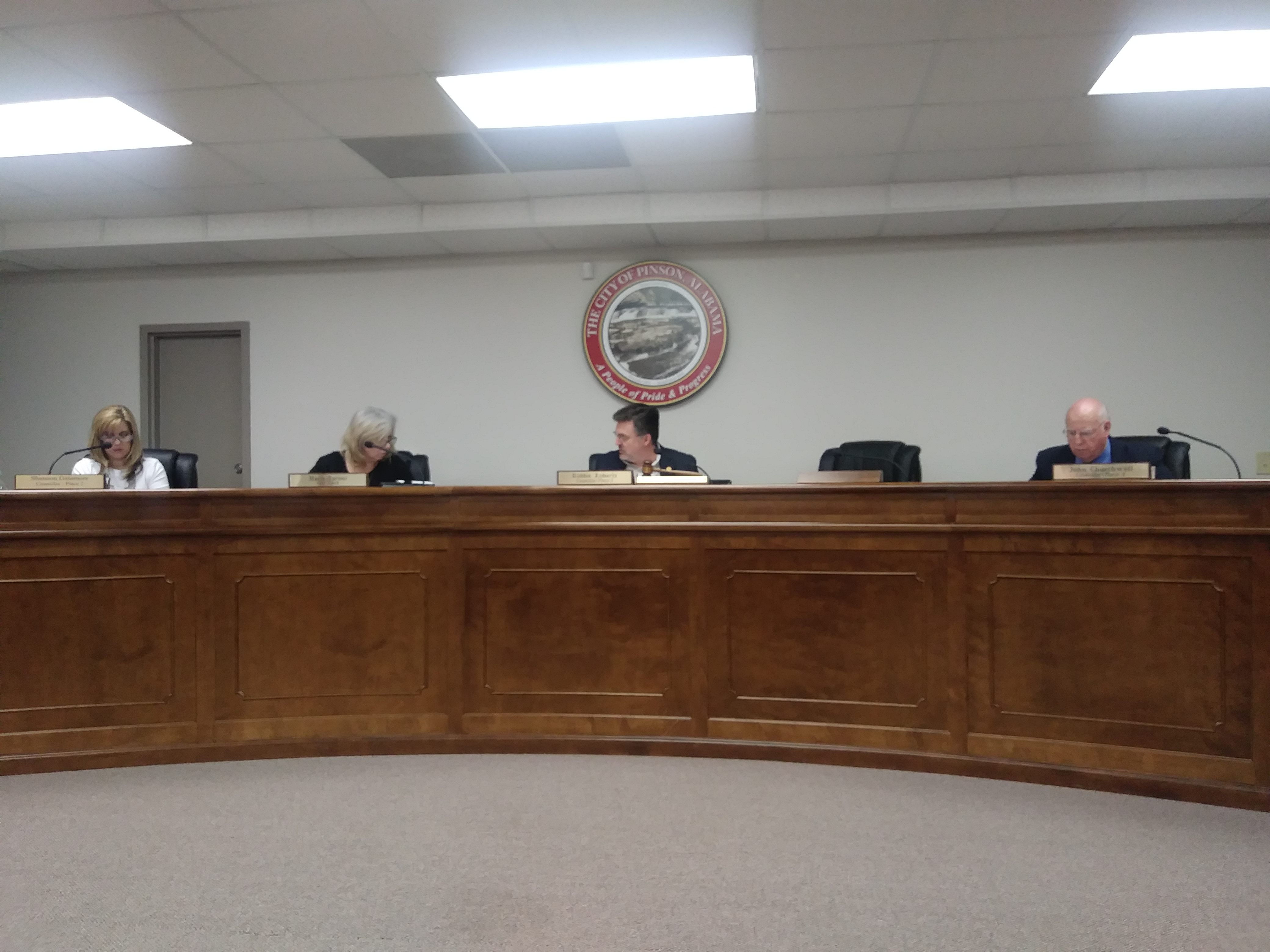 Pinson City Council at a meeting on May 17, 2018. Photo by Nathan Prewett.

Councilwoman Dawn Tanner proposed that the walking track at Bicentennial Park be repaved at an estimated total cost of $27,150 by Campbell’s Paving.  Currently the walking track has four areas where loose gravel gets washed away, creating locations where the track looks bad and may not be safe.  Only $12,750 of the total cost would go to Campbell’s.  Mayor Hoyt Sanders explained why.

“The reason that is divided, we’re a member of the county purchasing co-op, meaning we can purchase the asphalt at a significant discount, most notably without the sales tax on it,” Sanders said.

The council heard from Justin Tanner, the director of government affairs with Verizon, about a possible wireless franchise agreement.

“Verizon, through its wholly owned subsidiary, MCI Metro, is planning to construct a fiber optic communications network in public rights of way in the community,” Tanner said. “So far as services are concerned, we intend to offer one or more of the following services: competitive local exchange, voice and data communication services, Internet access, private line service, cell site front haul and back haul capacity using fiber optics, cables, and leasing of conduit and dark fiber for third parties, as well as future services as they become available…At this time, Verizon does not intend to offer any of the aforementioned services to residential customers. This strictly a business and government services bill.”

As Verizon would be using right of ways, it must first get the permission of the city, by franchise, to do so.  City Attorney Shane Black has drafted an early version of the franchise agreement.  This draft will be sent to the council and suggestions for revisions to the draft may follow.

In other news, the council considered the purchase of two police vehicles from the town of Kimberly in north Jefferson County.  Each vehicle carried a price of $1,000, with one being a 1997 Crown Victoria and the other one a 2005 Chevrolet Tahoe.  Pinson has need of such vehicles so that they may be used by reserve forces working with the Jefferson County Sheriff’s Department who may be assigned to a detail in Pinson, but not provided a car by the county.  Events such as the Butterbean Festival, football games and parades would benefit.  The council decided unanimously to make the purchases.

The Pinson City Council will meet again Feb. 21 with pre-council starting at 6:30 p.m. and the regular council meeting beginning at 7 p.m.