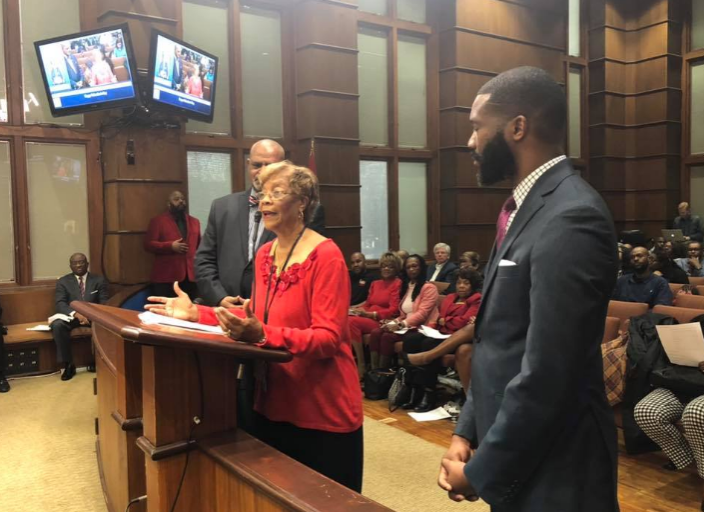 Woodfin introduced the idea and recognized Hoyt who represents the district where the indoor track facility is located.

Langford’s widow, Melva Langford, was in attendance at the meeting. She joined Woodfin and Hoyt as they made the suggestion to the full city council. The measure has not yet appeared on the council agenda.

Langford recently died after receiving a humanitarian early release from federal prison, where he was serving a 16-year sentence for fraud, bribery and corruption related to his term on the Jefferson County Commission.  The county later  filed the largest municipal bankruptcy in history at the time of the filing.

“He made many contributions to our city,” Woodfin said. “We would like to present a recommendation to the entire body of the council at a certain point to change the name, because we believe its fitting, to change the name of the Birmingham Crossplex to the Larry P. Langford Crossplex.”

Hoyt thanked the mayor and Mrs. Langford in his remarks to the council.

“We know that no different than Angela Davis, you have to deal with the body of people’s work,” Hoyt said. “You just can’t take one segment and judge the body of work. All of us have some issues one way or the other.”

Hoyt said when you look at Birmingham and see the things done under Langford’s leadership, the honor is appropriate. He mentioned Uptown, the baseball park, Crossplex, downtown and Visionland among Langford’s accomplishments.

“We are better because Larry Langford came through here,” Hoyt said. “I think it’s befitting that we do this. We want celebrate his work.”

Melva Langford expressed gratitude to the council for considering the honor to her late husband.

“He would be very excited,” Melva Langford said. “He was not a person who liked a lot of accolades. He just did his work, he did his research and he had his program together before he made his presentation.”

In 2000, the Lloyd Noland Parkway was renamed Richard M. Scrushy Parkway in honor of the founder of HealthSouth.

Following the conviction of Scrushy and former Governor Don Siegelman on felony bribery charges in 2006, the Fairfield City Council, where Langford had earlier served as mayor, stripped Scrushy’s name from the road and returned to the original Lloyd Noland Parkway name.

The move came at the same time that Langford was under investigation by the U.S. Securities and Exchange Commission.