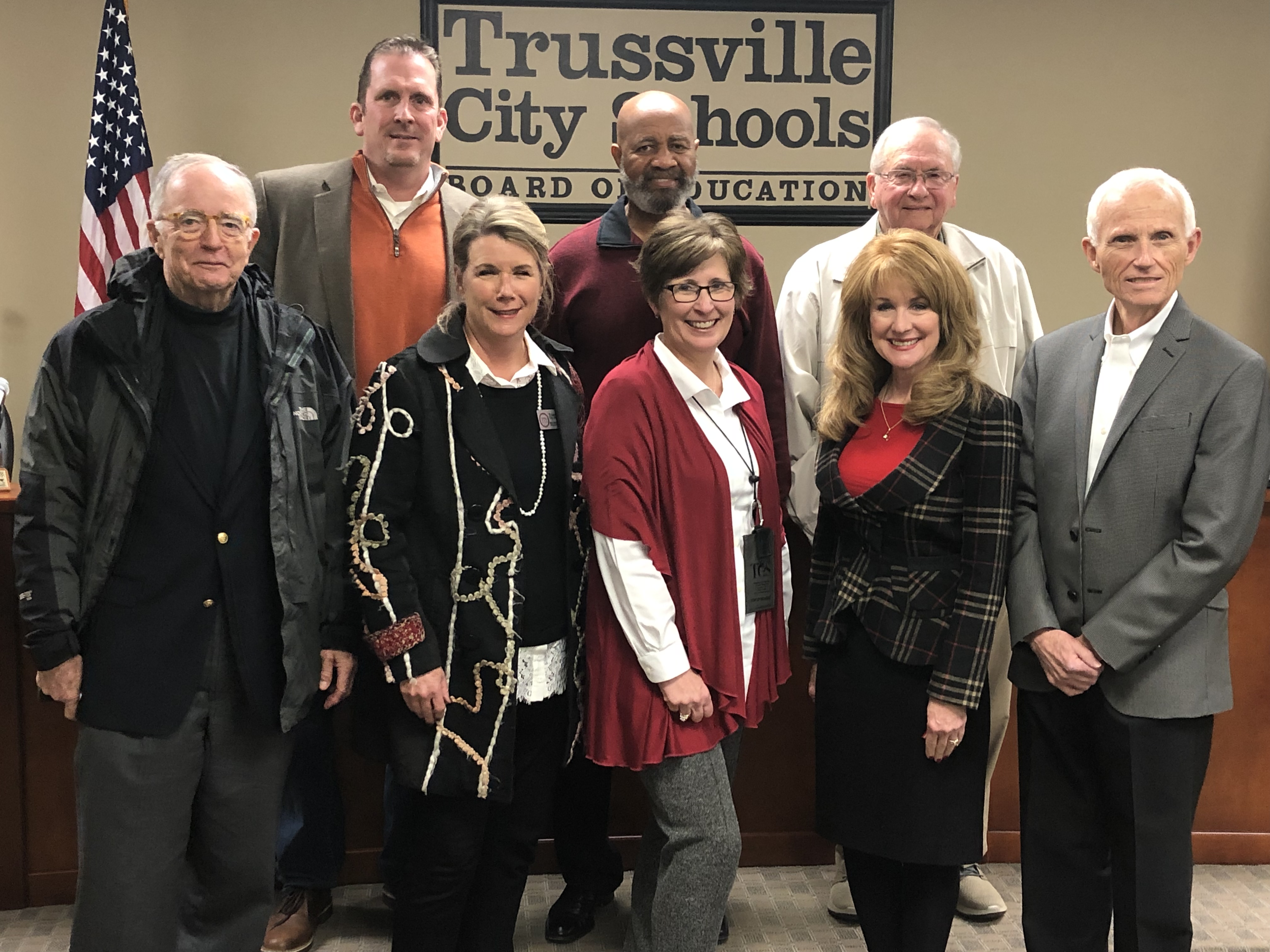 “We’re seeing projects just come every day to the city and things going on,” Freeman said. “The thing I always say is you guys kind of drive our growth.  Our school system is what gets people excited about moving into the Trussville area. So, thank you for what y’all do, and what you guys lay on the line to come to these meetings.”

“The first recognition is for Assistant Superintendent Beth Bruno, and I’m so proud of her and I would love for her to come forward while I talk about her for just a minute,” Neal said. “The Alabama Association for Supervision and Curriculum Development has named our Ms. Bruno the Curriculum Leader of the year for the state of Alabama.”

Because of a weather issue, the official ceremony was postponed until June, at which time Bruno will receive her award.

“There was supposed to be a luncheon,” Neal said.  “I was going, the whole team was going and we didn’t go, so she did not get recognized at the luncheon — it’s been postponed until June; but we’re going to go ahead and give her a Trussville Tribune that has the information about the award, and you (Bruno) will be presented officially in June with some things, but I must read my quote and I want to say that I mean this with all of my heart.”

“Ms. Bruno uses a team approach to create procedures that help all TCS administrators and teachers grow professionally, academically and personally,” Neal said. “She wants everyone in TCS to be successful in their roles and works to make sure all have the tools to be as effective as possible. Ms. Bruno is an outstanding leader that has truly led our system to the next level of excellence.”

Bruno received a standing ovation from everybody in the audience, as well as the board, and was personally congratulated by each member of the board.

The second recognition of the evening was for the entire transportation department.

“I’m so proud of them,” Neal said. “We have another ‘no deficiency’ report on any of our buses or on any of our inspections. And I would love for our transportation coordinator Dale Posey, our mechanics Claude Massey, Tim Unger and Brian Hoover to come forward.”

Posey addressed the board.

“The state allows 10 percent deficiency, is what they allow across the board on that, and we get a zero every year,” she said. “So, these guys…they do an exceptional job and I appreciate each one of them.”

The transportation team was recognized and congratulated by each member of the board.

In other news, the board hired Beth Cardwell as the new Social Worker Student Support Specialist.  Cardwell will be meeting with each principal in the school district individually and will discuss the specific needs of each school.

“I’m excited to be part of this team,” Cardwell said.

The board congratulated and welcomed Cardwell to Trussville.