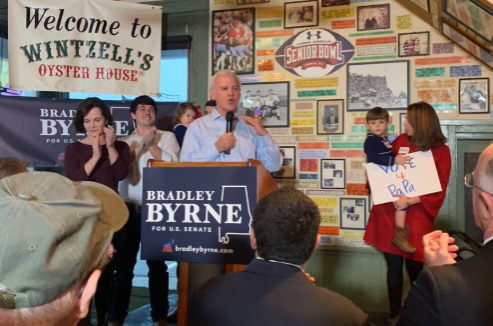 “The fight for America’s future is too important to sit on the sidelines,” Byrne said in a press release. “I am running for the United States Senate to defend the values important to Alabama.  We need a Senator who will fight with President Trump to defend the Constitution, build the wall, stand up for the unborn, push for lower taxes, make health care more affordable, and protect the Second Amendment. I will fight every day to bring Alabama’s conservative values to Washington.”

Byrne’s mission was to clean up the community college system following the scandal of the previous chancellor, Roy Johnson, and his cronies, for widespread corruption. Johnson and several others were eventually found guilty and sentenced to prison.

During the process, Byrne made enemies within AEA, which was led by Paul Hubbert and considered to be the group that most controlled Alabama politics with hefty campaign contributions. AEA members filed for a temporary restraining order in an attempt to stop Byrne from taking the post.

During Byrne’s tenure, several two-year college presidents were forced to resign or retired and more questionable financial dealings were uncovered, including state legislators on the college payroll for little or no work and a foundation that operated more as a slush fund.

“There’s no question, job one was to bring confidence back to the system,” said David Lanoue, head of the political science department at the University of Alabama told Dana Beyerle in 2007. “Scandals have taken an enormous toll. It was a national story.”

In 2010, Byrne would face Robert Bentley in a runoff for the Republican nomination for governor. During the runoff, a series of attack ads were funded by the Conservative Coalition PAC and the True Republican PAC. Due to campaign reporting laws, it was not known until after Bentley won the election that both groups were largely funded by AEA.

“When he declared for governor, he really declared war on us, and we had no choice but to get involved. It obviously had some effect on the outcome,” former AEA Executive Secretary Paul Hubbert told the Associated Press following Bentley’s win in 2010.

Jones was the winner of a special election for the senate seat Byrne seeks when allegations against his opponent, Roy Moore, surfaced in the Washington Post 32 days before the election. Moore was accused in the newspaper of an inappropriate relationship with an underage girl decades earlier. Dueling civil lawsuits between Moore and his accuser, Leigh Corfman, are still unresolved.

A press release from the Byrne campaign stated, “Bradley’s conservative record is second to none. From cleaning up corruption at Alabama’s two-year college system to fighting for Alabama’s priorities to standing up for President Trump’s agenda in Congress, Bradley doesn’t just talk the talk, he walks the walk.”

The election for the U.S. Senate seat will take place in 2020.