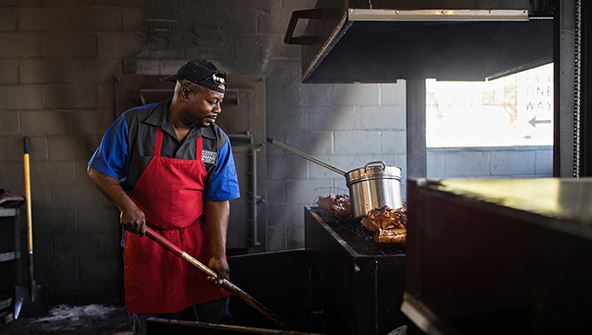 BIRMINGHAM — An award winning pitmaster has brought his old-fashioned style of barbecue to Birmingham, and the Magic City is just about as stoked as the coals that Rodney Scott uses to smoke his whole hogs on.

“The heart and soul of my BBQ is the whole hog,” said Scott in a statement. “We don’t say CUT-CHOP-COOK for nothing.  Cut the wood, chop it up and slow smoke our hogs all night long.” 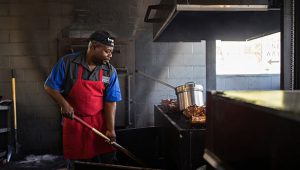 Scott prepares his barbecue over coals of oak with a hint of hickory and pecan hardwood.  His fresh and whole hogs are cooked belly down for 12 hours before being turned over, seasoned with his world-famous Rodney’s Sauce, and left on for just a while longer as all those beautiful flavors soak in. Scott then pulls the hogs and serves up his barbecue on, depending on the preference, sandwiches or plates.

Scott perfected his method over decades and the results were so spectacular that, in addition to being unofficially known as South Carolina’s “Charleston’s BBQ Guy,” in 2018 Scott won the James Beard Foundation’s award for the best chef in the southeast — an area that covers Georgia, Kentucky, North Carolina, South Carolina, Tennessee and West Virginia.

Rodney Scott’s BBQ offers a full menu that, of course, features barbecue plates and sandwiches, but also includes pit smoked turkey, pit cooked barbecue chicken, wings, catfish, steak sandwiches and even salads.  The house even has sides such as fresh cut fries, baked beans, mac and cheese, corn bread and greens.  And if you’ve got room after all that, Rodney Scott’ BBQ has a banana pudding that tastes just like mom used to make, because it is the banana pudding that his mom used to make.