TRUSSVILLE — Severe weather is possible for much of central Alabama, including Jefferson, St. Clair and Blount counties, on Saturday night and early Sunday morning, according to the National Weather Service in Birmingham.

The storms are anticipated in the metro Birmingham area between 8 p.m. Saturday and 1 a.m. Sunday. 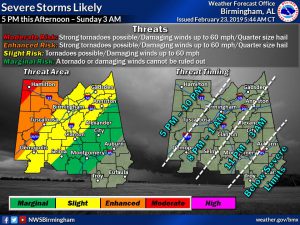 Saturday, there is a chance of showers and thunderstorms, then showers likely and possibly a thunderstorm after noon. Some of the storms could be severe.

The chance of precipitation is 60 percent. New rainfall amounts between a tenth and quarter of an inch, except higher amounts possible in thunderstorms.

Saturday night and into the early morning hours of Sunday, showers and thunderstorms are expected before midnight, then showers likely and possibly a thunderstorm after midnight.

Some of the storms could be severe and produce heavy rainfall. The low is expected to be around 51. South winds from 10 to 15 mph are likely, coming from the west after midnight. Winds could gust as high as 30 mph. Chance of precipitation is 90 percent. New rainfall amounts between a half and three quarters of an inch possible.