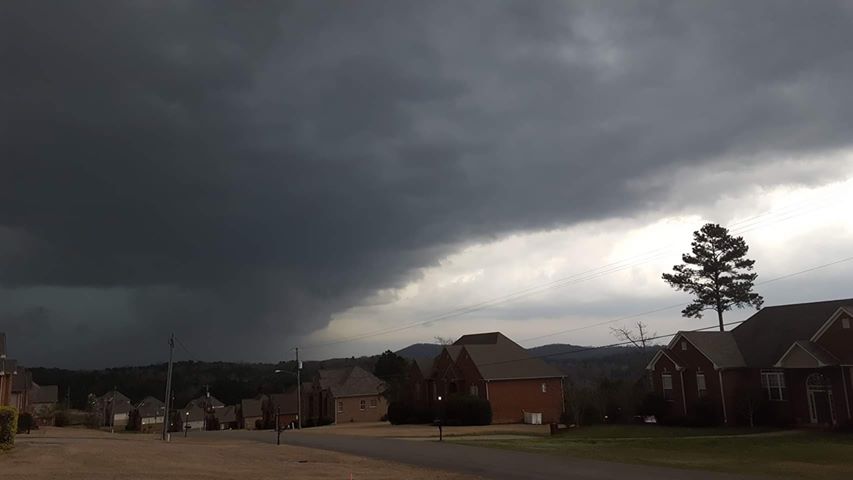 BIRMINGHAM — The National Weather Service in Birmingham confirmed that 14 tornadoes hit Alabama on Thursday, March 14. There were two supercells that are believed to have produced four or more of these tornadoes.

An EF-1 twister with a 7.1 miles path hit Autauga County, just 10 miles north of Autaugaville, at 8:44 p.m. The path of the tornado started at Dawson Mill. It ended 10 minutes later at Vida Junction. A few homes had minor damage and several trees were uprooted or snapped off. 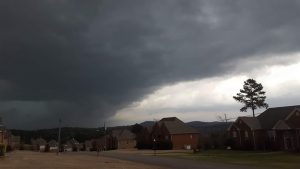 March 14 storm as seen from Margaret

An EF-2 hit Kim’s Corner in Elmore County at 9:32 p.m. It started in Holtville and traveled 8.5 miles. With 120 mph winds, the storm downed hundreds of trees, downed power lines and damaged many homes. Some of the homes lost their roofs and/or had collapsed walls. One car was moved over 30 yards. Two convenience stores were damaged.

An EF-1 tornado spawned from a supercell touched down in northeast Perry County and northwest Chilton County. It traveled 9.55 miles and was about 300 yards wide. Hundreds of trees were snapped off or uprooted, power lines were downed and several outbuildings were damaged.

An EF-0 also hit Perry and Dallas Counties. It touched down just west of Central Mills Road in far southern Perry County. One home had a large section of its roof removed and trees were damaged, mostly in very rural areas. The tornado’s path was 3.05 miles long and 300 yards wide.

An EF-0 left a 12.02 miles path in Chilton and Coosa counties. The Lay Lake tornado began just east of Interstate 65 near Hwy 145, causing tree and roof damage. The twister produced a max of 85 mph winds and caused damage to mobile homes and barns near County Road 249. Damage from the storm was observed crossing Lay Lake and spanning into a forested area northeast of Little Tom Road. This tornado is believed to have cycled and produced three additional EF-0 tornadoes.

Another EF-0 produced from the supercell hit Goodwater in Coosa County. Damage was limited.

An EF-0 in Blount County touched down on County Road 1, west of Oneonta, at 5:09 p.m. Its path was 2.58 miles long. Trees were uprooted and one family’s porch was damaged.

An EF-1 in St. Clair County caused significant damage along its 4.71 miles path. Around 5:54 p.m., the twister touched down just west of St. Clair Springs Road, just west of Hwy. 411. 90 mph winds from the storm are being blamed on damage to chicken houses, damage to hundreds of trees, roof damage to homes and outbuildings and blocked roadways due to downed trees.

An EF-1 hit the Allgood community in Blount County at 5:07 p.m. with 90 mph winds. It traveled 4.57 miles and was approximately 600 yards wide. The tornado touched down near Tidwell Hollow Road where trees were damaged and uprooted. Mobile homes and vehicles were severely damaged or destroyed by falling trees. An outdoor building along Highway 75 was also destroyed. The tornado continued to cause minor damage to homes along Springville Boulevard. A destroyed bar was also observed by the NWS near Old Brook Lane.

An EF-0 caused minor damage in Randolph County. at 10:00 p.m., the tornado touched down in Wedowee and lifted nine minutes later in Woodland. 70 mph winds are blamed on spotty damage including a barn that was destroyed. This storm was produced out of a supercell that also produced tornadoes in Chilton and Coosa counties. The path was 4.38 miles long and 75 yards wide.

A very brief EF-0 hit Tuscaloosa County. It was on the ground for less than a minute near Oswall Creek.

An EF-0 spawned from a supercell, with peak wind speeds of 70 mph, hit the Heiberger area of Perry County. Tornado damage was limited.

An EF-0 hit Marengo County at 6:49 p.m. It caused sporadic damage along its 5.06 miles path near Highway 25 and County Road 59. One home near the Perry County line suffered minor damage.

Large straight-line winds and hail have also been blamed for reported damage in south-central parts of the state. Again, these are preliminary results. The weather service said several days of surveys are still needed to get more information.

There were no deaths or injuries reported.