Perez, a native of San Diego, led a game-winning drive that was capped by a 44-yard field goal from kicker Nick Novak as time expired, allowing the Iron to snap a two-game losing streak, including a heartbreaking 1-point loss to San Antonio in week four. 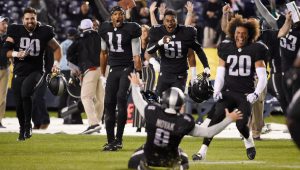 Photo courtesy of the Iron

“To be able to do it in front of all my family and friends who have really supported me through everything, through thick and thin,” Perez said. “I obviously didn’t do too well last week. I wasn’t playing well. For them to come out and still support me when I wasn’t supposed to play is really big.”

Keith Price earned the start at quarterback, but was banged up early in the game after taking a hit from two defenders at once. Perez stepped back in at quarterback and played well. Perez threw three touchdowns and 359 yards. Price took a big hit, but he was cleared to return, according to the broadcast team. Iron head coach Tim Lewis stuck with Perez, who had the hot hand.

Perez’s first touchdown of the year came on a short toss to running back Trent Richardson, who broke multiple tackles for the 13-yard touchdown reception.

On his second score of the day, Perez stood tall in the pocket under pressure, taking a big hit as he tossed a quick slant to receiver L’Damian Washington, who turned the short pass into an 83-yard touchdown. Washington flashed his speed, outrunning multiple defenders down the sideline for the score to make it 12-3 midway through the second quarter.

Perez also connected on a nice bomb to receiver Jamal Robinson for a 41-yard gain.
Along with the reception touchdown, Richardson added a rushing touchdown early in the third quarter. Richardson showed impressive leg strength to push the pile for the 2-yard score to put the Iron up 21-9.

“Trent, you can’t say enough good things about him,” Perez said. “He’s a great player. He has a lot of power as you see when we get down there. We trust the O-line 100 percent to move the line, and we trust Trent 100 percent to get into the end zone.”

Perez and Washington would connect again, this time on a fade route for a 23-yard touchdown. It was a beautiful throw from Perez as Washington hauled the pass to put the Iron on top 29-23 early in the fourth quarter. Perez also found Washington for the 2-point conversion.

Washington had a career day, catching four passes for 128 yards and two scores on the day.

“I knew he had it in him,” Lewis said. “I’m just happy it happened tonight.”

Defensively, the Iron pushed their team total to 12 takeaways on the year after picking up two interceptions. Iron cornerback Bradley Sylve intercepted an errant pass from Fleet quarterback Mike Bercovici and cornerback Jamar Summers also intercepted a pass from Bercovici.

“Typically when we win the turnover margin, we have a good chance to win,” said Lewis.