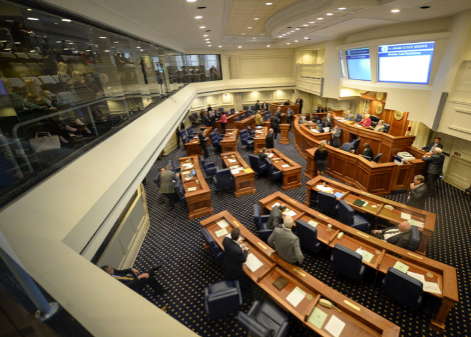 MONTGOMERY – A bill to repeal the state’s Common Core education standards cleared a Senate committee Wednesday, less than 24 hours after it was introduced, and could get a vote in the full Senate today.

Senate President Pro Tem Del Marsh, R-Anniston, in previous years stood in the way of Common Core repeal efforts, but now says removing the standards and charging the Alabama Board of Education to start over is aimed at improving Alabama’s lagging student performance.

“My position early on was that the (Alabama State) Department of Education and the board, elected by the people, should figure this out,” Marsh told Alabama Daily News this week. “That’s policy. We’re sitting here today with math scores in the eighth grade level at 49th in the country and reading at 46th. I mean, you can’t justify that. So we’re saying after nine years with this program, it’s not working and we need to change direction.”

The bill currently requires the state to revert to the previous standards developed and adopted during the 1990s and 2000s for the upcoming academic year, and then adopt new ones for the 2020-2021 school year. Educators say that’s a burdensome and costly task.

State Superintendent Eric Mackey said the bill has a lot of unintended consequences.

“Changing teaching standards requires a lot of expert work by dedicated education professionals,” Mackey said. “It will not happen overnight.”

A fiscal note on the bill said switching standards twice in two years will cost the Alabama State Department of Education $6.1 million. The cost to local school systems would be about $4.8 million.

Developed the National Governors Association and the Council of Chief State School Officers, Common Core standards were meant to address deficiencies in several states’ curriculum standards based on a report from the American Diploma Project that showed 28 percent of U.S. high school graduates were not prepared for college Math or English. They are also meant to align the varied curriculum standards across the country, providing portability between states that is particularly coveted by military families. Forty-five states have adopted the standards, including Alabama in 2010.

Marsh’s bill, Senate Bill 119, would “terminate the adoption and implementation of the curriculum standards commonly known as the Common Core Standards, also known as the Alabama College and Career Ready Standards, in K-12 public schools” and “terminates all plans, programs, activities, efforts, and expenditures relative to the implementation of” the current curriculum standards.

The bill specifically applies to math and reading standards and prohibits the state board from adopting new standards related to Common Core. Marsh said he intends to give the board until May 2020 to adopt new standards, but the bill requires the state to revert back to previously adopted standards in the meantime.

That means, should Marsh’s bill be enacted, Alabama schools could be operating under three different sets of math and reading standards over the next two school years.

Marsh said Wednesday he’s willing to work with concerned education groups to amend the legislation. The Alabama Superintendents Association and the Alabama Association of School Boards expressed concerns about the bill’s impact on schools during the committee meeting. The Alabama Education Association, which lobbies on behalf of teachers and school workers, took no position saying its members were split on the issue of Common Core.

In an email alert, the A-Plus Education Partnership warned the legislation could prohibit students from taking Advanced Placement courses and earning career technical credentials. It would also prohibit teachers from achieving National Board Certification, for which they’re offered monetary bonuses. Those programs are tied to national standards, which Marsh’s bill prohibits.

“That’s not my intention,” said Marsh, who is considering running for U.S. Senate next year against Democrat Doug Jones.  “Common Core is my objective, and in fact we are going to have an amendment on the floor (Thursday) to make sure that’s very clear.”

It is not known whether Marsh’s planned amendment will address educators’ concerns about reverting back and forth between standards.

“I’m more than willing to look at alternatives because what we’re doing is not working,” Melson, chair of the Senate Education Policy Committee, said Wednesday.

The committee approved the bill without opposition, with Sen. Vivian Figures, D-Mobile, noting that her support was contingent on the understanding that the bill would be amended. Other committee members include Sens. Tom Butler, R-Huntsville, Priscilla Dunn, D-Birmingham, McClendon and Shelnutt.

Rep. Terri Collins, R-Decatur, is chair of the House Education Policy committee, which will likely consider Marsh’s bill should it clear the Senate. In previous sessions, Collins has said the state’s strict standards have had a positive impact in her district and local educators support them.

On Wednesday, Collins said Marsh’s bill caught her by surprise.

“I always support high standards for Alabama students and will watch the bill as it progresses through the process,” she said.

Marsh said as of earlier this week he hadn’t spoken with State Superintendent Eric Mackey, but had shared his intent with some board members.

Gov. Kay Ivey, signaled general support for Marsh’s bill Wednesday, but added that changing standards “should not be taken lightly.”

“As a former educator and president of the Alabama State Board of Education, I know how important it is to have good course materials to teach,” Ivey said in an emailed statement. “Efforts like this should not be taken lightly, and I believe we should be deliberate in determining a course of study for our state. I support Sen. Marsh’s efforts to ensure that headlines about Alabama ranking last or close to last in education become things of the past.”

The Department of Education and State Board have been deliberating for months over revisions to Alabama’s current math and reading curriculum standards and as well as new assessment practices that follow behind those standards.

“We understand and agree with the desire to realize greater academic success,” Mackey said. “However, reverting back to Alabama Course of Study standards adopted in the late 1990s and early 2000s would be a huge undertaking for standards that will only be used for a short period of time.”

Asked if he would consider amendments that could bridge the gap between the current standards and the future ones without reverting back, Marsh said he is open to the conversation.

“I’m open, but the message is this: Alabama State Board of Education, you need to address this problem and fix it. The nine years of Common Core in Alabama is not working.”

Calls to state board member Jeff Newman, who represents northwest Alabama, were not returned Wednesday.

Calls to state board member Cynthia McCarty, whose district includes Morgan and Etowah counties, were not returned Wednesday.