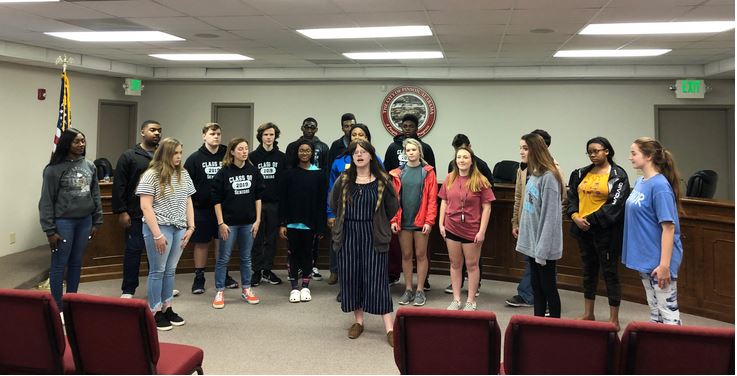 “I was here about a month ago, if you’ll remember, and asked for some money to get another spotlight for us at the theater,” Bailey said. “So, we wanted to come out and sing for you.” 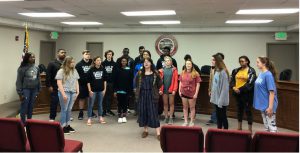 The students performed two songs from “Godspell” for the council.

The council considered the purchase of a hand-held radar unit that would be used by law enforcement in Pinson.  The hand-held radar unit works well when held at 90 degrees and is very useful for observing traffic speeds in residential areas.  The cost of the unit is $1,356.  The council voted unanimously to purchase the item.  This purchase brings the number of handheld radar units owned by the city to three.  The council also considered the purchase of a single hitch mounted radar unit, also known as a speed sign.  The device would be used to inform motorists of their speeds while traveling down Pinson streets.  The council opted, by unanimous vote, to purchase the speed sign for a price of $3,900.

In other news, the city council considered a resolution to re-designate the position of an employee and amend a pay range of a position in the public works department. The council unanimously passed the resolution, which reclassified an employee as a “skilled laborer” with a pay scale of $10-$13 an hour and eligible for any city employee benefit.  The resolution also adjusted the pay scale of “crew lead man” from $10-$14 per hour to $10-$15 per hour.

The council will next meet on Thursday, April 11.