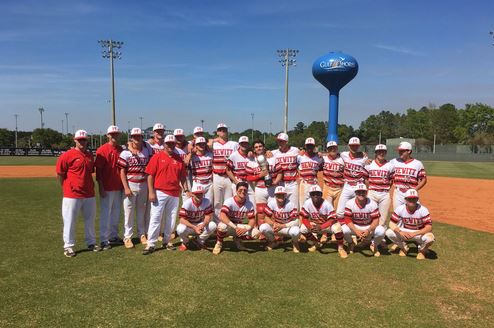 ORANGE BEACH — For most people a spring break trip to the Gulf Coast means days of relaxation on the beach to be followed by fun under the sun.  This is not the case for the Hewitt-Trussville varsity baseball team.  When the Huskies head to the Gulf Coast on spring break, they go down there to win tournaments.

Over the week the Huskies put up six wins and zero losses to win the Gulf Coast Classic, a tournament which hosted a total of 63 different teams from across the country.

Thursday was the big one for the Huskies as they notched a win in both the semifinal and the championship game. 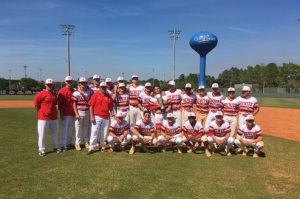 First up for Hewitt Trussville was Tinley Park, a school from Illinois, in the semifinal.  Matt Miller had the mound for the Huskies pitching a four-hit complete game with five strikeouts.  Miller had a great defense behind him which turned three double plays in the infield.  Things went well for the Huskies early when Husky Zach Defnall took a hit from a pitch with the bases loaded.  This allowed Kerrigan Edmonson  to score a run.

The score was tied up at the third inning when Julian Sauger hit a sacrifice fly allowing Kerrigan Edmonson to put the Huskies in the lead once again.  Hewitt Trussville scored their final run in the fourth inning when Tyler Mauldin hit a two-out single up the middle to bring home Keith Lanum.

Tinley Park kept things interesting in the seventh with a lead-off single.  Matt Miller kept Hewitt-Trussville in the lead by striking out two batters and putting the game away.  The Huskies ended up defeating Tinley Park 3-1.

Later Thursday Hewitt Trussville took on Southside Gadsden in the Championship game.  Creed Parker took the win for the Huskies with a complete game scattering nine hits.  Once again, the Husky defense stepped up.  The biggest play of the game came in the third inning when Southside Gadsden had the bases loaded with only one out.  Southside Gadsden hit a ball up the middle and off of Parker’s glove.  The ball was deflected to second baseman Tyler Mauldin.  Mauldin fielded and flipped to shortstop Hudson Boren who threw to first for the double play to end the inning with no runs scored.

Hewitt-Trussville hitting was on point Thursday.  Zach Defnall hit a two-out RBI double in the first inning to give the Huskies a 1-0 lead.  Davis Snow hit a sacrifice fly scoring Hudson Boren to push the lead to 4-0 in the fourth inning.  Tyler Maulding hit a triple to center field scoring Jacob Bishop later in the fourth inning.  The Huskies defeated Southside Gadsden 7-2, securing their place as tournament champions.