Suicides down in Jefferson County in 2018

JEFFERSON COUNTY – The Jefferson County Coroner’s Office said there were fewer suicides in the county in 2018 than there were in 2017. While a decrease is a good sign, there are still a high number of self-inflicted deaths, according to the coroner, and first responders are dealing with the impact. 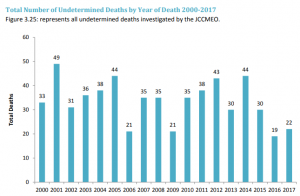 In 2017, the county saw a significant increase in people taking their own lives. Coroner Bill Yates said 107 were confirmed that year. In 2018, there were 85 suicides. From 2001 – 2007, the number of suicides stayed under 80 per year. Yates said while the number for 2018 is a sign of improvement, there is still a concern for mental health care in the state.

The latest suicide in Jefferson County happened Monday, April 1, in a public setting. The coroner said police were on a scene near Legion Field when a man took his own life. Yates said he sees suicide cases on a regular basis but said public suicide deaths are rare.

For first responders, Yates said, dealing with the aftermath of a suicide call can be traumatic.

Trussville Fire Department Assistant Chief Keith McLaughlin said when responding to a suicide, the impact left on family members of the deceased is difficult to see.

“Suicide, in general, is hard to understand,” McLaughlin said. “In those cases, you can’t ask the person why they did it. Sometimes you get a little anger wondering how someone could do this to their family.”

McLaughlin said he has learned trying to understand the act of committing suicide is impossible at times.

“By looking at someone, you would think they have a great life, living in a good neighborhood, and for whatever reason, they decided it wasn’t what everyone else thinks it was,” McLaughlin said. “Those are confusing to us. Whatever the problem was for that person, it was an intent to do that to himself, but the lasting effect was on the family.”

Firefighter Jesse Clifton said the first responders have been well-trained to deal with emotional effects of death scenes.

“For most of us, we just have a disassociation with it,” Clifton said. “We have learned to compartmentalize. It’s the hardest when it’s kids, pre-teens and teenagers. You just never know what issues they have dealt with. We have a job to do and if we get there and it’s already done, we can’t fix it.”

At the end of the day, McLaughlin and Clifton said they can’t take problems home with them. That’s why they said their relationship with their co-workers is important.

“We know each other and our personalities, and it tends to go better and people will open up to the ones they know,” said Clifton.

“We have a lot of outlets now that we didn’t have years ago,” said McLaughlin. “We have disaster psychology, grief counseling and a lot of churches around here have some outlet for grief. There was a time early in my career where you didn’t talk about it. I can’t tell you when that changed, but there has been a direct change in the culture.”

Suicide attempts are more common in Trussville than suicides, according to McLaughlin. When responding to those, first responders have to take the patient to the hospital for a mental evaluation.

“Even if someone threatens to harm themselves, they go to the hospital,” McLaughlin said. “They have to be evaluated.”

McLaughlin said a lot of times life experiences have led up to suicide threats.

“It’s really important to not judge,” McLaughlin said. “This is their cry for help, this is their attempt to try and get someone to listen to them.”

“Medical facilities are having to pick up the slack left by mental health facilities shutting down in the state,” Yates said.

If you or someone you know is suffering from mental health problems, you can call the Crisis Center at (205) 323-7777 for help.