CLAY — American Legion Post 205 is now up and running in Clay. The group held its first meeting Monday, April 8, 2019.

The newly chartered organization was made official just three days after the 100th anniversary of The American Legion. The commander for the new post, Tony Berenotto, said the group will be named after a local hero, SSG Michael W. Hosey. 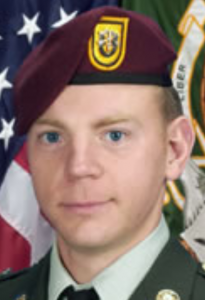 “He was a Clay-Chalkville graduate and a true American hero” Berenotto said.  “He gave his life for his country in Afghanistan.”

Hosey died on Sept. 17, 2011, at the age of 27. He was assigned to 3rd Battalion, 1st Special Forces Group, Joint Base Lewis-McChord, Washington. Hosey was killed when insurgents attacked his unit at FOB Ripley, Uruzgan Province.

The SSG Michael W. Hosey Post 205 of the American Legion already has 125 members.

“We knew there was a need out here,” Berenotto said. “We kept saying, ‘man, why don’t we have a post out here?’ This is a very patriotic community out here.”

The city of Clay is allowing the post to operate out of the historic Jayford Ware House, the former home of the Clay Public Library. The post has signed a 100-year contract for $1 a year.

There have been hundreds of veterans in the east Jefferson County area that have been a part of an at-large post, according to Berenotto. That state-managed American Legion Post allows people to join if they do not have a local post.

“That’s how we ended up growing to 125 so quickly,” Berenotto said. “We had about 30 people lined up ourselves, then we made phone calls to those people who were in the holding post and we found all these people.”

The largest room in the old library holds about 15 people. The post will have to renovate to make room for more members, but until then, Berenotto said he has plenty of support from local municipalities. 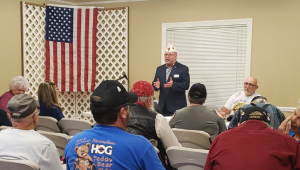 “The cities of Clay and Trussville have gone out of their way to welcome the post and to support the veterans and their families in our community,” Berenotto said. “The mayors and leaders of each city have met with us often and spent hours helping us get off on the right foot.”

Monthly meetings will be the second Monday of each month at 7 p.m. Refreshments are served at 6:30 p.m.

SSG Michael W. Hosey Post 205 will support local veterans, their families and the youth in the community.

“We plan to carry on the proud traditions of the largest wartime veterans organization in the world,” Berenotto said.

Other activities include:
– American Legion Rider attendance at the funerals of local veterans
– Raising funds for the American Legion Legacy Scholarship Fund
– Advocating at all levels of the government supporting American Legion legislative efforts

The SSG Michael W. Hosey Post 205 of the American Legion is looking for corporate sponsors and accepts donations from individuals.

For information on how to help or how to get involved, email Post205AL@gmail.com.