JEFFERSON COUNTY — An integral, and often overlooked, link in the chain of first responders is telecommunicators.  These dedicated individuals, popularly known as dispatchers and 911 operators, must take in vast amounts of information, process that information and allocate resources in the best way possible.  The lives of both members of the public as well as police, fire, and rescue depend on their ability to do their job the right way every time. 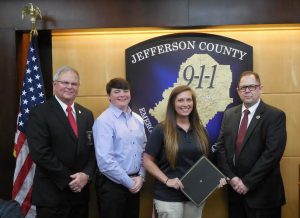 “The telecommunicator is the first contact for an individual experiencing an emergency,” said Donnie West, director for the Jefferson County Emergency Communication District. “The telecommunicator is the professional that determines the need for services from law enforcement, fire and EMS services, along with providing emergency medical dispatch protocols to the caller rendering medical assistance until first responders arrive on the scene.  Our staff is truly professional.”

Brittany Richardson won the Rookie of the Year Award.  She got into this form of public service after having been in the medical field.  In some ways, she has been serving people in every job she has been in, however being in telecommunications has offered some surprises.

“I’ve always had an urge to want to make a difference and help people,” said Richardson. “Whatever job I’ve done has always seemed to go that route.  So when I got into this field, it really caught me by surprise how proud it makes you, you really feel that there might be one small chance that you might make a difference in someone’s life…it just makes you feel good that you could be the light at the end of someone’s tunnel.”

Telecommunicator Danielle Mealer won the Trainer of the Year Award.  Because of her tireless efforts, new hires become adept and skilled at a job that can save lives.  In some ways, the success of everyone Mealer has trained is inspired by her.

“It means a lot to me,” said Portillo. “There’s 22 soldiers a day that are killed by suicide, so that I could play a little part, that God’s gifted me with the ability to be able to talk to them and put me in a place where I could talk to just that one and save just that one, it is definitely a blessing to me that I was able to help.”

Crystal Davenport, a public safety dispatcher for the police department, was given an award for her dedication to the job.  Davenport was on vacation in Huntsville when a personal shortage came up on her shift.  Davenport drove in every night during her vacation to cover the shortage.

“I really love this job,” said Davenport. “I started dispatching in 2007. I love it because…you really get one on one, and you can help citizens out and get the police there to them.  I really like it; we have a lot that we have to go through but it is rewarding knowing that we’re able to help people.”

In addition, the Jefferson County E-911 Emergency Communication District also recognized Telecommunicator Teresa Weems for an article she wrote that was featured in APCO’s magazine.  Her article, “Spirit of a Trainer,” laid out the importance of Jefferson County Emergency Communication District 911 trainers and their role in training and mentorship for new telecommunicators while maintaining a high lever of expertise and knowledge found in the career field of public safety.

“It was a two page (article) to tell what we thought the spirit of a trainer (was), what a trainer needed to be able to do our jobs on a daily basis,” said Weems. “To get the new hires and the new employees on the same page and on the same level that we are already at.  I believe that we need to be a mentor and a coach to all of them, even if they’re not our direct trainee.  I feel that the trainees need to be able to come to any of us with a question and for us to be able to assist them with that.” 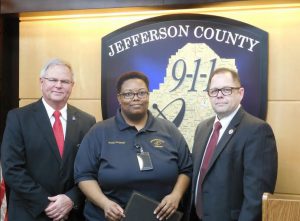 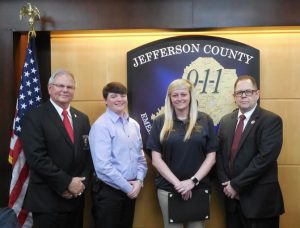 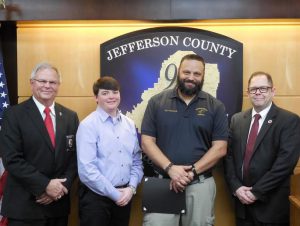