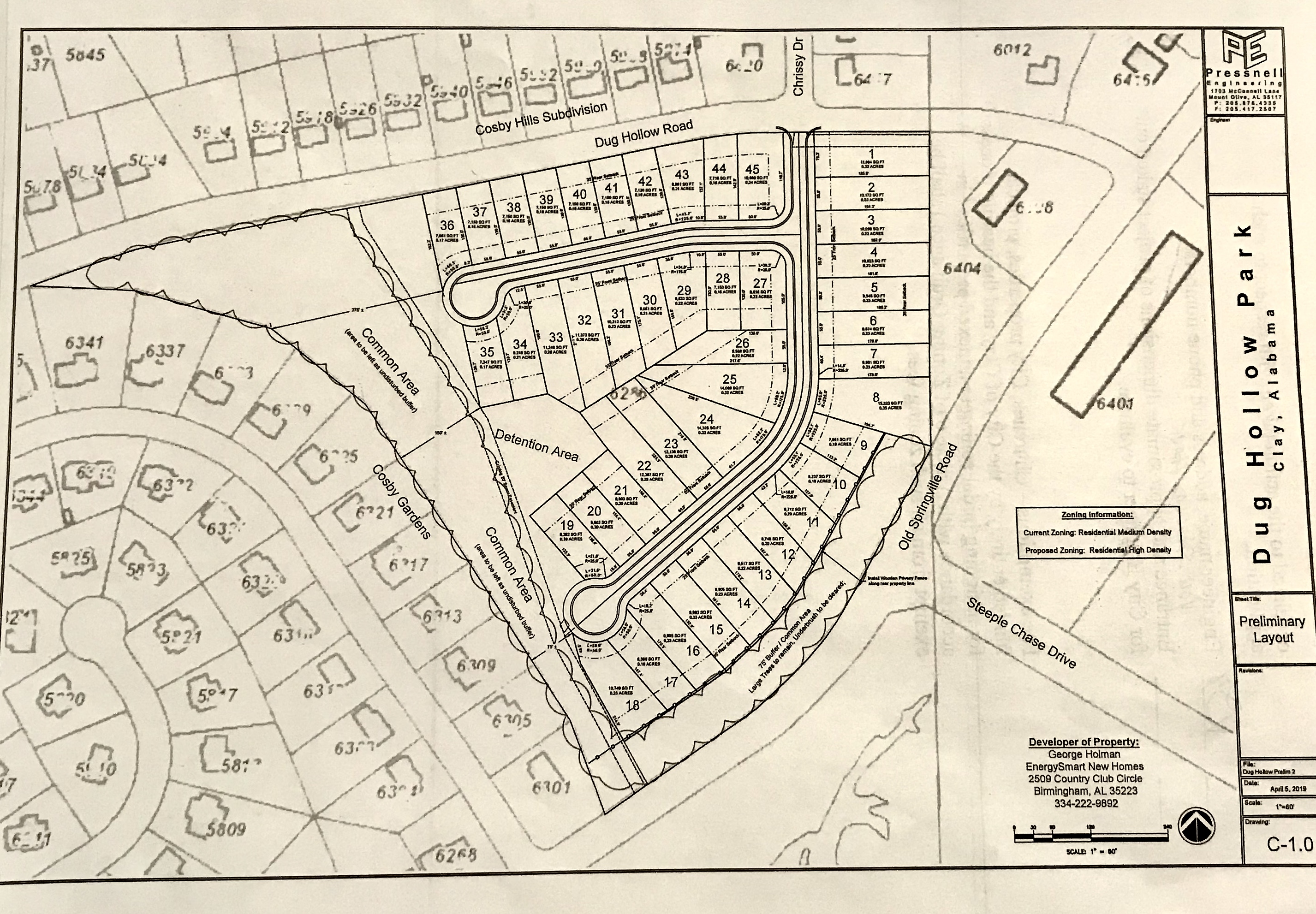 CLAY — The Clay City Council held a public hearing Tuesday, April 9, 2019, to discuss and hear from the community concerning the Planning & Zoning Commission’s recommendation to allow the rezoning of parcels of land at 6286 Old Springville Road from Medium Density Residential to High-Density Residential for the purpose of a garden home subdivision.

Following the public hearing, the council approved the recommendation in a three-to-two vote.

City Manager Ronnie Dixon said that there is a requirement to have two public hearings for a request for changes in zoning and that the first one had already been held before Planning & Zoning Commission. P&Z approved the recommendation, with only one dissenting vote from commissioner Alaina Tow. 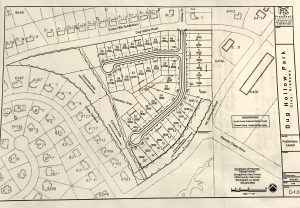 The property to be rezoned, known as Dug Hollow Park, is bordered by Dug Hollow Road and Old Springville Road.

“We’re proposing to rezone this from medium to high,” said a representative from the developer, EnergySmart New Homes. “We’re doing it right now in a neighborhood called Paradise Valley, which is right there off Old Springville. It’s similar type houses that we propose to build here, as well. Our typical customers nowadays are what I consider empty nester type customers. They’re downsizing, they want affordable homes, but also affordable from an energy standpoint and a maintenance standpoint. They want yards that they can maintain.”

The representative added that the subdivision will have a homeowners association and that the fence along the property line will be a cedar shadowbox fence. The only entrance and exit to the subdivision, according to the preliminary plans, will be across from Chrissy Drive on Dug Hollow Road.

Counselor Becky Johnson said that she would like to see something put in at the entrance to help with the line of sight for traffic.

“I know a red light probably would be out of the question because it’s so close to the other red light, but I know there’s mirrors that the developer or whoever could put up that would help with the line of sight,” Johnson said.

The representative said that, because it is a county road, the developer would have to go through the county to get approval for something like that.

“They’re real interested in sight distance right here,” he said. “So we have to work with them on making sure we’ve got the proper sight distance up to the hill.”

Councilor Dennis Locke mentioned concerns he has heard about traffic backing up at the new intersection, and Councilor Ben Thackerson asked if the entrance could be moved farther back on Dug Hollow Road to the crest of the hill.

“I mean, I guess it could,” the EnergySmart representative said. “We’re really trying to line it up with an existing street right here (Chrissy Drive)…We’re not married to this layout right here. The idea was essentially that we were going to put 45 lots in this total acreage right here…this just originally, just seems natural to me just to tie in right there to Chrissy. There again, we’ve got to go through the process of getting the county approval for the intersection.”

Locke said that “the county may like that (intersection with Chrissy Drive), but it almost makes it harder because the people trying to turn left out of Chrissy are now going to be competing with the people turning out of Dug Hollow Park. I’m just trying to figure out, like Ben said, if it was further up the hill, and the county would allow that, it might ease that somewhat.”

Johnson also expressed her disappointment over the size of the houses planned for the subdivision.

“I’m sorry the homes weren’t a little bit bigger and I’m sorry that people are not wanting bigger homes when they move to Clay,” she said. “I do understand what you’re saying, but I still would’ve like to have seen larger places.”

Though many citizens were in attendance, only three spoke during the hearing.

“I did hear that there is going to be an HOA, which is great,” Jack Hahn said.

Hahn then asked if there has been an environmental impact study done and expressed his concerns about the new subdivision impacting Cosby Lake.

Hahn also mentioned his concerns over the lack of storm shelters available for the future residents of the garden homes.

“Since you’re pushing older people there, empty nesters I think was what it was called, I don’t see any provision for a storm shelter, a community storm shelter,” Hahn said. “These people have no place to go if something bad happens in our area, and it has happened.”

Mayor Charles Webster said that he is sure the developer would put safe rooms in the homes if the homeowners asked for them.

“I know there’s ways to put in-the-ground safe rooms in in-slab homes,” Webster said. “So I’m sure if they requested some type of safe room, they would have to incur the extra cost, but that would be something they would be open to doing.”

The second citizen to speak to the council was Jim Shinn.

“I went to my first zoning and planning meeting about a week ago and I was impressed with the way the business was run, and I’m not against this project,” Shinn said. “I’m just not satisfied with the process that got us there to their approval.”

Shinn said that there was a discussion at the P&Z meeting about paperwork that wasn’t there yet and that “nobody could agree on what the setbacks were going to be,” yet the recommendation was approved.

“As this project goes on, every step of the way will have to be approved,” Webster said.

Finally, Dwain Hagen spoke, stating that he was opposed to the rezoning.

“I’m not against property rights of this owner of developing his property at all,” Hagen said. “But…like Mrs. Johnson brought up, she wants to see bigger houses there. You’re cramming in 45 houses into an area that doesn’t have any garden homes around there, right in that area. If you build full-size houses, they’ll sell. Steeplechase, there’s not a new house being built over there that hasn’t sold. The developer was asked previously why he did not want to build large houses, normal size houses. He said there’s not enough profit, that’s the bottom line. I get that. He wants to make a lot of money and then move on. But we have to live here…when you make this decision and we build these houses, they’re here forever…These houses are going to sell 20-30% cheaper than what my house and my neighbors’ houses sell for…I don’t know for sure that it won’t (affect property values). If I did know that it’s going to increase my property values, I’d be fine, but I don’t think that it will.”

After a moment of silent consideration, Councilor Dennis Locke made a motion to approve the Planning & Zoning Commission’s recommendation to change the property zoning to High-Density Residential.

“Since I was on the commission and I voted for it there, I’m going to make a motion that we approve this here based on all the restrictions that we’ve already talked about and as it was recommended from the Planning & Zoning Commission,” Locke said.

Webster seconded the motion and the motion passed in a three-to-two vote, with council members voting as follows:

“Good job of representing the people,” one said, and another booed the council’s decision.

In other city news, Locke announced earlier in the meeting the winners of the March 2019 $500 School Grants. They are as follows:

The next Clay City Council meeting will be held Tuesday, April 23, 2019, at Clay City Hall. The pre-council session will begin at 6 p.m. and be followed by the regular council meeting at 6:30 p.m.